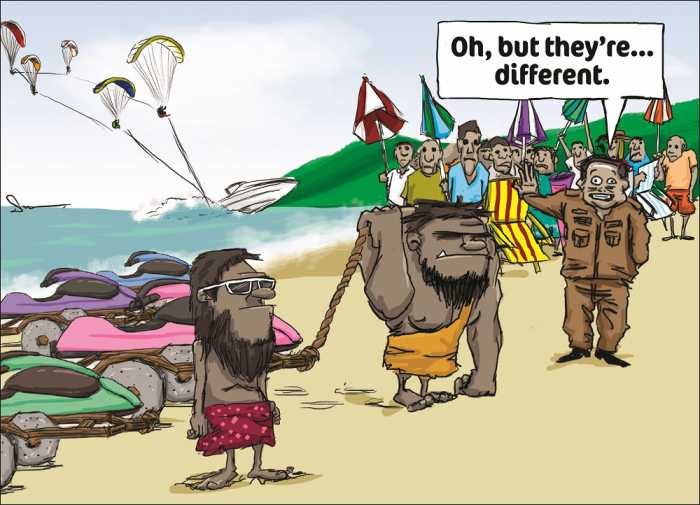 PHUKET: The Gazette joins its online readers in expressing outrage at the recent announcement by the Marine Office that jet-ski rental operators will be allowed to remain on island beaches (story here).

The dumbfounding news comes despite a woman being run over by a jet-ski trailer on Kata Beach (story here), children nearly being hit by a jet-ski at Surin Beach and a Russian tourist killed while riding one of the machines at Patong (story here) – all in the same week.

Thanks to the brilliance of the Marine Office, not only are operators permitted to continue renting out jet-skis at Phuket’s key tourist beaches, but they will do so under a set of new “rules” that will be even harder to enforce than those that preceded them.

When the National Council for Peace and Order (NCPO) took power in May, few people in Phuket were prepared for the overhaul that transformed the island’s beaches, elevated tourist safety to a top priority and sent a signal that the days of tourism-killing corruption would no longer be tolerated.

The arrest of several prominent local politicians and their protégés on corruption charges were telling first signs that the NCPO meant business. The subsequent bombshell announcement that key officials at local administrative bodies were to be charged with illegally divvying up public beach land (story here) to rake in untold millions from beach vendor concessions over the years seemed to be a coup de grâce in returning beaches to the public.

After such milestone events as the arrest of two longstanding mayors (stories here and here) and the clearing of beaches of all vendors, allowing jet-ski operators to continue running their businesses beggars belief.

It also flies in the face of the NCPO itself, which ordered that jet-ski operators come under closer scrutiny as part of the cleanup campaign. In Phuket, these operators are one of the few allowed to bring their machines across the sands each morning and night in order to keep operating at the beach.

Equally irrational is the pronouncement that would-be swimmers in Patong, now deprived of the right to rent a lounger and umbrella, will be segregated like aquarium fish into 16 de-facto “swimming pens”, each of which will taper down to a width of 100 meters just 50 meters offshore.

A pen and a napkin quickly reveal just how favorable the plan is to jet-ski operators, as well as parasail operators whose welfare also seems to be of high importance to the Marine Office.

One can only speculate on possible motives for the Phuket Marine chief’s vigorous, long-term support of an industry that has brought so much disrepute to the island over the years.

The Gazette would like to call on the NCPO, which includes the national police headquarters in Bangkok as one of its pillars, to fully review the jet-ski plan – and the real rationale behind it.