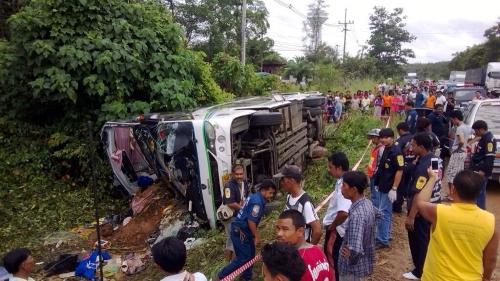 PHUKET: One person is dead and 29 others injured after a bus from Phuket heading for the Northeastern province of Nong Khai overturned in Surat Thani province yesterday afternoon.

“We took 12 passengers to Baan Takhun Hospital and 17 to Phanom Hospital,” said Sophol Rakthao of the Phanom Police.

“The driver, Anuchit Thongnuapaed, 32, was pinned behind the wheel. Rescue workers managed to free him and he was promptly taken Surat Thani Hospital,” he said.

Passenger Khamdee Onkhiao, 54, from Udon Thani, died at the scene.

The bus, which departed Phuket at 11am yesterday, was carrying 28 passengers and two bus crew from Phuket.

“The bus overturned at a known accident black spot – a sharp curve on the Phanom-Thappud Road in Khlong Cha-un Sub-district.

“The road was slippery, causing the bus driver to lose control of the vehicle,” Capt Sophol said.

“We are waiting for the driver to recover so we can question him about the accident,” he added.

“Most of the injured passengers have already been discharged from hospital. Only three remain in hospital care,” a Phanom Hospital staff confirmed to the Phuket Gazette.