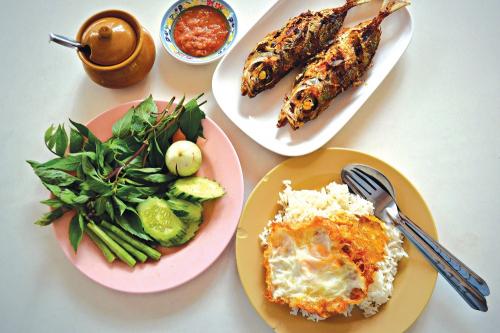 PHUKET: First thing I did when I got out of prison last week was go to my favorite Thai-Muslim eatery and scoff down a brunch of champions – fried fish, veggies, Chernobyl-strength namprik (chili sauce), with plenty of rice and a fried egg to prevent me from spontaneously combusting.

It cost less than half the price of an equally voluminous plate of farang food at one of Phuket’s countless cheap Thai-Western restaurants.

I love eating at truly local places for three reasons. I’m a “cheap charlie” (as I’ve been told numerous times by various Patong bargirls), the food is authentic and delicious, and, as I always strike up a conversation with a Phuket native son (or daughter), it’s helping my command of Thai.

Phuket’s gastronomy is divine at the inexpensive-end – Southern Thai, Thai Muslim, Isan, Burmese. Indeed, in common with Singabore [sic], often the less you pay, the better you dine.

I’ll go a long way for a really exotic curry. A while ago I was at Three Pagodas Pass on the Thai-Myanmar border because I was hellbent on trying a Mon curry from Thailand’s northwestern neighbor.

However, the border was closed to all except Thai and Myanmar nationals.

Then a shifty-looking character with a betal-stained smile and a creepy demeanor that made me wonder if he’d been a grave robber in his previous life, sidled up to me. I was on my guard when he inquired if he could help me with anything.

I explained what I wanted, and he said he’d “borrow” my rented motorbike, cross the border, get the curry and bring it back for me. Yeah, right. Sayonara motorbike, a lot of explaining to do at the rental shop, and a whopping compensation bill.

But in a moment of madness I agreed, and handed him a 100baht note. Off he disappeared down a dirt-track in a plume of dust towards the border-crossing.

Less than 30 minutes later he returned, handed me the keys to my bike, a take-out curry, the receipt (inked in Mon script), and a substantial amount of change. He declined my offer of a tip.

It was the third-best curry I’ve tasted on Thai soil. The second-best was the geang phed pla I had at Phuket prison last week (where I was visiting an inmate, I should add). And Number One was the massaman I had a few years ago at an eatery in the shadow of Phuket Town’s clock tower. I’ve noticed that place is still there. Note to self: must go back.

Phuket Opinion: Beauty is only skin deep – even in paradise