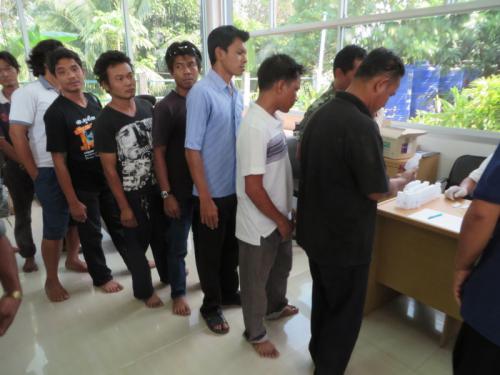 The men, who confessed to taking half a pill of the drug, will be admitted to a rehabilitation program, explained Mr Suthee.

“Usually, if a driver tests positive and admits to having used the drug, we send him to rehab. If he does not confess, we perform more rigorous urine tests at the hospital. If those results come back positive, we arrest him.”

Kaengkla Jeangjedriw, the owner of MKR Transportation, told the Gazette that he would give his drivers a second chance after rehab.

“I always give second chances to my employees. However, if they come back from treatment and test positive again, I will not allow them to work for me. There is no third chance,” he said.

The blitz yesterday was the first step in a new initiative set in motion by Governor Maitri in response to the deadly bus accident at Patong Hill on December 29 (story here).

“If bus drivers don’t use drugs, the number of accidents in Phuket will decrease. Random drug testing is just one way to start solving the problem,” Gov Maitri said.