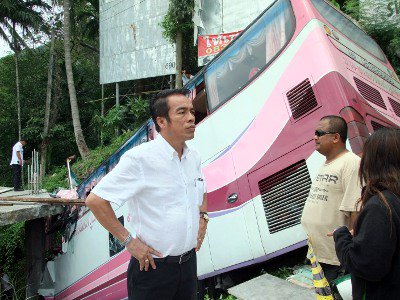 PHUKET: The driver of the Phuket tour bus full of Russian tourists that ran off the road on a steep curve heading into Patong this afternoon told police that brake failure caused the accident.

“The brakes failed. That’s what caused the crash,” said Nakrob Tiewtrakul, 42, from Ratchaburi, who suffered a deep cut on his forehead when the bus plowed into the side of a building under construction, ripping a gaping hole in the side of the bus.

Mr Nakrob said he has been a bus driver for more than 20 years. “I did not drink alcohol and I was still very much awake when the accident happened,” he told the Phuket Gazette.

“I wasn’t driving fast. I was going only about 20 kilometers an hour. When the brakes failed, I had to quickly choose the safest place to go to make the bus stop, injuring as few people as possible,” he added.

Patong Deputy Mayor Chairat Sukbal told the Gazette that he believed brake failure was the culprit.

Regardless, Patong Police Superintendent Arayapan Pukbuakao told the Gazette that police were still continuing their investigation in the cause of the accident.

Patong Hospital Deputy Director Apantree Iamsakul said that 22 of the 41 passengers on the bus, mostly Russian tourists, were injured and taken to Patong Hospital.

“There were no fatalities in the accident,” she said.

“Four of the injured were later transferred to other hospitals,” she added.

Ms Snozhana Ganzyuk, 25, was transferred to Phuket International Hospital. She had a deep wound to her left leg that exposed the bone.

Ms Ganzyuk is still recovering at the hospital.

Mrs Pnuinka Belnepa, 40, was rushed to Bangkok Hospital Phuket in Phuket Town, where she is still recovering from her injuries. Staff at the hospital declined to disclose the extent of her injuries.

Mr Serqey Batoror, 36, and Ms Irina Sergova, 40, were also taken Bangkok Hospital Phuket. Staff there also declined to disclose the extent of their injuries, but did confirm that both were discharged from the hospital this afternoon.

A public information liaison person at Bangkok Hospital told the Gazette, “The insurance company told us that more people have yet to present themselves to our hospital for x-rays and further treatment.”

The other 18 injured tourists had all received treatment for light injuries and have returned to their hotel.

The Russian tourists arrived in Phuket this morning, the first day of their 16-day holiday on the island.

Phuket Caveat: Man accused of bestiality says his prostitute turned into a donkey