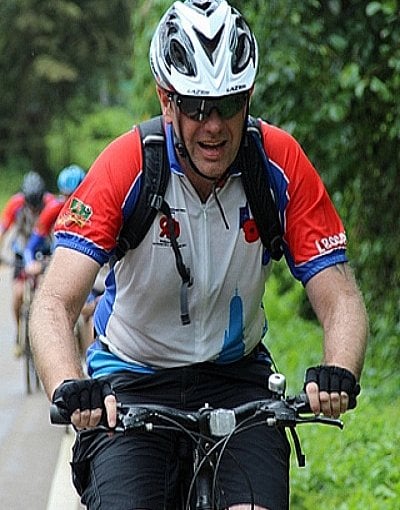 Completing the ride, called the “Spice Roads Royal British Legion Big Push”, are British ex-service folk, the oldest of whom is Tony Margetts at 64.

Just before setting off, Mr Margetts received the results of an MRI saying that he had chronic degeneration of the neck bones (spine), but that hasn’t stopped his training.

“Cycling in Bangkok is even more challenging because of the flooding. Roads have become rivers,” he said last week.

“I had to cross two rivers like this today while out on my cycling practice. Yesterday was even worse, the water reached half way up my cycle wheel on my way to Bang Tan Chang Station,” he said before setting off for Phuket.

Dave Haddon, 63, has also put in miles of preparation. He pedaled 3,168km in 130 hours in training – the equivalent of cycling from Bangkok to Phuket and back more than three times, at an average speed of 24kph.

“Many of the riders have little to no bicycle riding experience, and the nine-month training schedule which began at the start of this year was the first time they had ridden since childhood, making this a monumental charity challenge that honors the families of British and Thai war veterans killed or wounded in battle, for whom the money is being raised,” said Antony Bell, Team Manager.

Also on the team are Peter Werby, Shirley Christieson, Les Weaver, Terry Sherwood, John Murphy and Duncan Daiper, who was at first daunted by the challenge.

“Not having ridden a bike in or around Bangkok before, it did at first seem a bit daunting. I mean Bangkok would not be your choice destination for biking,”Mr Daiper said.

“But as soon as you get on the bike and head through the city, whether you are on the main roads, in the narrow side streets, or, as we have done on most of the rides at some point, gone through markets bustling with people… I suppose the best way to describe it is as a great sense of freedom,” he added.

“I consider myself very lucky being able to do this trip. It’ll be hard I’m sure, but I am riding with a great bunch of people and for a cause that is very close to my heart.

“Having lost friends in both Iraq and Afghanistan serving their country, there is no better motivator for me to see that we all get to the finish line while making as much money as we can to help support the men and women who have served our country,” he added.

The riders are looking forward to the final stage tomorrow, after two days of conquering the hills from Ranong to Kuraburi, then onto Khao Lak today.

“It was fantastic to see the determination in our riders to make it. Not only did they scale every mound, they also covered a vast distance, notching up 115km in the process, makes this, with absolute certainty, the hardest day faced. We’ve once again been assured that tomorrow is the easy day…but the fear of déjà vu striking again is a concern!” said Antony Bell.

To keep up to date with the latest details of The Big Push and make donations to the Royal British Legion, visit spiceroads-rbl-bigpush.com