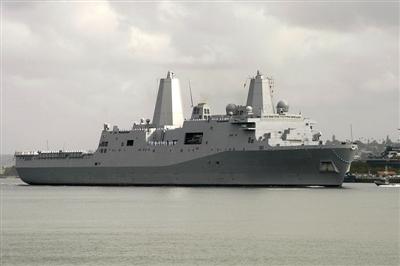 PHUKET CITY: Phuket’s tourism economy will get a much needed boost this week with the arrival of six US Navy ships with a complement of over 5,700 sailors and other military personnel.

Already moored at the Phuket Deep Sea Port since June 17 is the USS Mitscher  with its crew of 281.

A group of USS Mitscher sailors yesterday took a bus up to Phang Nga to put a fresh coat of paint on the Home & Life orphanage for children who lost their parents in the 2004 tsunami disaster.

The event was organized by the good folks of the Rotary Club of Patong Beach.

The USS Mitscher is scheduled to ship out tomorrow, but five more US warships are expected to arrive on Thursday for some much needed rest and relaxation. They are:

The amphibious assault ship USS Boxer, with its crew of 2,982.

The USS Comstock dock landing ship, with its its crew of 857. The Comstock is the first US Navy combat ship to have a fully integrated crew of male and female sailors.

The USS Gridley destroyer and its crew of 380.

The USS Thatch guided missile destroyer, with its crew of 217.

The 208-meter USS New Orleans amphibious transport vessel and its crew of 1,059.

Unless duty calls, all five vessels will remain in Phuket until June 29 or 30.

The Rotary Club is busy making preparations for crews of the other ships to carry out community relations projects.

It has already been confirmed that members of the USS New Orleans crew will take part in activities at the Barnhem Muang Mai Thai-Swedish Foundation orphanage in Mai Khao and at the Bang Klong Sai School in Phang Nga on June 27.

Bar owners in Patong and other parts of the island are also mobilizing their own troops to greet the sailors, well informed sources have told the Gazette.