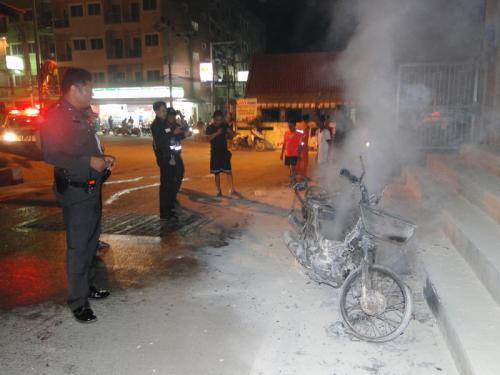 PHUKET: Patong Police are looking for a gang of teenagers who were seen setting alight four motorbikes in the beach resort town early this morning.

Firefighters were called to Soi Klong Bang Wad, near Wat Patong (map here), at 4:30am after local residents saw the motorbikes, parked opposite the Aood Watch and Optic store, go up in flames.

“Eye-witnesses said a group of teenagers poured gasoline on one of the motorbikes, then the fire spread to the other motorbikes parked on either side,” he added.

Siriwan Tiangheng, the owner of Aood Watch and Optic, said she came out of her house above the shop after hearing people shouting to find two of her motorbikes ablaze.

“I never had a conflict with anyone. There’s not a single person I can think of who would do this,” she said.

Maj Pathapee said police were treating the incident as related to the arson attacks on other motorbikes across the island in recent months.

“We believe the suspects are the same people who set on fire motorbikes at Laem Singh Beach (story here). We are now checking footage from CCTV cameras in the area in the hope that we can arrest them as soon as possible,” Maj Pathapee said.

On the evening of the Laem Singh attack, March 12, another bike was found burning on the side of Pha Hin Tang Road.

The next day, yet another motorbike was found ablaze along the Kathu-Koh Kaew Road, not far from the Phuket Mining Museum, at 3pm (story here).