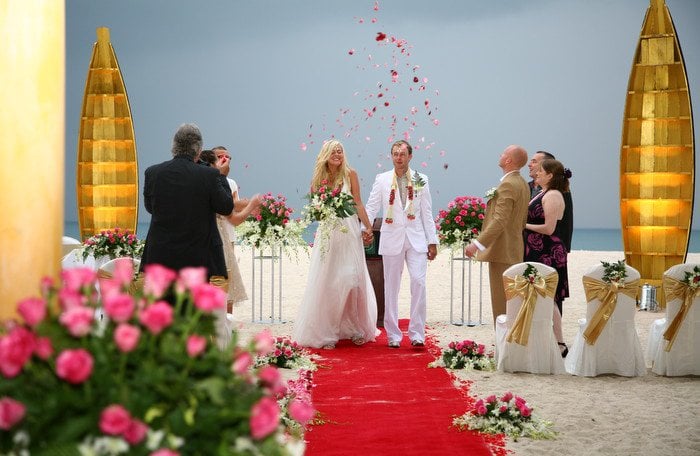 PHUKET: The Phuket ban on beach-wedding ceremonies was lifted earlier this week.

The ban was put in place earlier this year as the province attempted to prevent private entrepreneurs from staking public beach areas for profit making endeavors.

“Even though such events can bring publicity to Phuket, we cannot allow them to take place on our beaches, as that is public land,” said former Vice Governor Somkiet Sangkaosuttirak in March.

That policy has now shifted under the new leadership at Phuket Provincial Hall.

Vice Governor Chokdee Amornwat, who is responsible for establishing beach rules for the entire island, confirmed to the Phuket Gazette earlier this week that the ban was no longer applicable.

“As long as the photo shoot or ceremony doesn’t stake out a piece of the beach for private use, and such activities aren’t being held regularly by the same organizer as if they own the beach, then there should be no issues,” Vice Governor Chokdee said. “These activities actually help us to promote Phuket, as long as they don’t detract from the experience of other beachgoers.”

Such positive promotion is important following an incident in March where a distraught couple, who had already booked a beach wedding, discovered through a Gazette story that beach wedding ceremonies were banned on the island.

“We have a small beach wedding planned for the end of March. When we paid deposits three weeks ago, nobody warned us,” wrote the Gazette reader, who asked to be identified only as ‘Polly’.

“We even went to the beaches and there were no signs whatsoever! Why do I need to find this out from a random article that we are banned from doing this? Now what can we do?” said Polly. “Hotel booked, family flying in, photographer booked. Is there any way to get a permit for Bang Tao Beach for that 20-minute ceremony with eight people? Who should we turn to?”

Polly went on to explain that she and her fiance had been travelling through Southeast Asia for a few months in search of a location that was most suitable for their needs. She noted that they had settled on Thailand because of its renowned hospitality, and Phuket because it was easily accessible for her elderly parents.

Siri Yokthong, vice president of the Cherng Talay Tambon Administration Organization (OrBorTor), originally told the Gazette that perhaps a ‘quiet’ wedding on the beach would be acceptable.

However, he later withdrew the statement after confirming with then-Vice Governor Somkiet who insisted that the no-beach-wedding rule would be strictly enforced (story here).