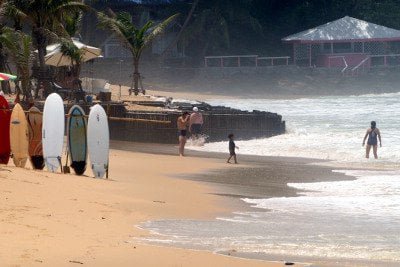 PHUKET: With Maitree Intusut landing on the island on Monday as the newly appointed Phuket Governor, officials in Cherng Talay are wasting no time in their attempt to make a fresh start in clearing encroaching restaurants from the sands of Surin Beach.

While Governor Maitree and his wife, Mrs Palinee, were wading through throngs of well wishers welcoming the couple at Phuket International Airport, Ma-ann Samran, the president of the Cherng Talay Tambon Administration Organization (OrBorTor), was briefing his officers on his plan to clear encroachers from the beach.

“I will draft a letter to the governor requesting his support to establish a zone at Surin Beach, inside which only local people will be allowed to operate as food vendors,” Mr Ma-ann explained to the Gazette.

If the plan is approved with the support of the governor, Mr Ma-ann will have the power to clear any structures from the beach, including the long-debated “sea break” in front of Pla Restaurant.

The sea break became the focal point of high tension between local officials and the restaurant owners in September last year when a raid by 30 officers was called off at the last minute due to orders from Thalang District Chief Narunart Suwanpratheep.

The officers, acting under orders from Tri Augkaradacha, the Phuket governor at the time, were told to stand down after Chief Narunart issued a letter giving the owners of Pla Restaurant the right to keep the sea break, as it “helped protect against coastal erosion”.

The sea break also conveniently allowed Pla Restaurant to extend its tables and chairs closer to the water’s edge, effectively dividing the beach in two. No other restaurant along Surin Beach is permitted the same privilege.

“The owners of Pla Restaurant said they would remove the structure after staging one last large event on the beach last year. They still haven’t removed it,” Mr Ma-ann said.

“I do not have the power to order those vendors off the beach. Even if we receive a complaint that someone is encroaching on the beach, can we go and inspect it, but we cannot do anything substantial,” he added.

Mr Ma-ann explained that the Cherng Talay OrBorTor, as a local administration, is “less powerful” than the Thalang District Office, rendering the OrBorTor powerless to act against the district chief’s order last year.

He hopes the result will be different this time around.

Both Governor Tri and Chief Narunart retired on September 30. Mr Ma-ann expects to file his request within the coming days.

“I understand that everyone needs to make a living, but it needs to be contained so we can preserve the natural beauty that all tourists come to Phuket for, and the reason why they spend time at the beach restaurants.

“I am not going to stand and point at any particular person or business, but I will do my best to get a budget to develop the area for everyone’s benefit,” he added.

“I have heard about this problem, and I have assigned another senior officer to investigate which laws apply in this case,” Mr Udom told the Gazette.

“I know no other details. If you want to know more, you will have to come and interview the officer in person,” he added.