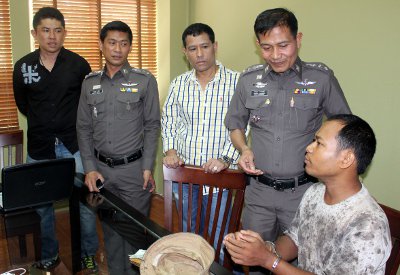 PHUKET: Police are continuing their search for the remaining thief who robbed a Phuket gold shop on September 17, making off with millions of baht of gold jewelry.

One of the two thieves, a Burmese national named by police only as “Mr Koson”, surrendered to police after seeing his wife arrested on national television.

However, Phuket police are still searching for his accomplice, a Burmese national known to police only as “Mr Mek”.

“Mr Koson told us that Mr Mek had fled Phuket. Our investigators found out that he had been hiding in Nakhon Sawan province. We searched his close friend’s house and his wife’s house in Nakhon Sawan, but we have yet to find him,” Phuket City Police Superintendent Sermphan Sirikong told the Phuket Gazette.

“I have asked Nakhon Sawan Police and Region 6 Police to keep the area under surveillance because I believe he will sooner or later come back to his wife and his son,” he said.

Investigators are still preparing their case against Mr Koson. “We are in the process of questioning more witnesses and collecting more evidence. I think we will finish and be able to pass the case on to the public prosecutor soon,” , Col Sermphan added.

Mrs Mooza has been charged with possession of stolen goods.

Capt Thada Sodarak of Phuket City Police confirmed to the Gazette that about 143 bahtweight of gold items, valued at about 3,575,000 baht, were stolen in the robbery. Initial estimates ranged from 2.9 to 3.9 million baht.

Police have also yet to confirm Mr Koson’s full name.

“He does not have a passport or any form of official identification, so no one knows his real name. He has been living in Thailand since he was young and people just call him ‘Koson’,” Capt Thada said.