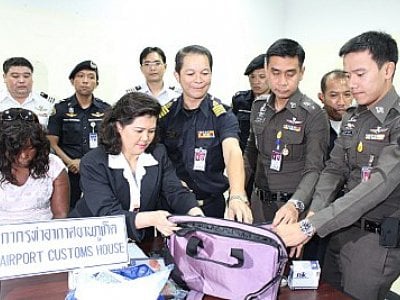 “When her bag went through the x-ray machine, Customs officers noticed there was no computer in the laptop bag inside. They searched the suitcase and found that the laptop bag lining had been cut and two bags containing the drugs had been inserted,” Ms Montira explained.

“The bags containing the drugs had been covered with carbon paper,” she added.

Ms Novela arrived on board a flight that originated in Doha, Qatar, but arrived in Phuket via Kuala Lumpur.

“This was her first trip to Thailand. She arrived at the airport at around 4:30pm and she planned to travel back to her country on October 22,” Ms Montira said.

“Officers found an SMS on her mobile phone telling her to go to a specific hotel room in Patong,” she added.

Ms Novela has been charged by Tah Chat Chai police with drug possession and trafficking. Police are questioning her for further details.

According to the CIA Factbook, despite a brutal civil war lasting decades ending in 1992, Mozambique remains one of the poorest countries on the African continent.

More than half of last year’s national budget was provided by international aid.

Spiraling prices of everyday necessities prompted street riots in the capital Maputo in 2010.