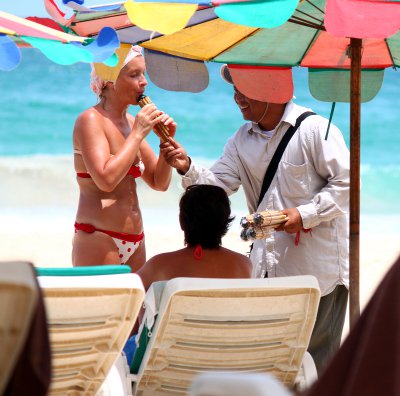 PHUKET: Phuket Vice Governor Somkiet Sangkaosuttirak arrived at the Karon Municipality office in Kata on April 24 to hear firsthand how a spat between local vendors and Cambodians who peddle trinkets and other items on nearby beaches had erupted into a full-blown brawl in broad daylight for all tourists to see.

“One Thai man was seriously injured in the melee, which had frightened foreign tourists running for their own safety,” said Arunsri Klunma, chief of Karon Village 1.

“The fight has damaged our image as a tourist destination, especially that of Karon Beach,” she added.

Karon Deputy Mayor Itthiporn Sangkaew said the influx of Cambodian beach peddlers to beaches in Kata and Karon followed a similar skirmish with local peddlers in Patong. That fight prompted Patong Municipality to drive them off the beach.

“In Kata-Karon, the Cambodian peddlers also had a conflict with another group of beach peddlers from Ayutthaya and Roi-et provinces, who had been working at Karon Beach for many years.

“One of the Cambodian men was beaten by the group earlier. Then, on February 7, the Cambodians brought more than 10 people to beat up one man in revenge,” Deputy Mayor Itthiporn said.

Beach chair operators working in the area, fearing for their safety, had armed themselves with knives, he added.

After the brawl, five Cambodians were arrested and fined 2,000 baht each, he said.

Karon tambon chief Winai Chitchiew told the meeting that on February 8 both sides were prepared to attack each other, but Chalong Police were informed and managed to defuse the situation.

The Thais involved were fined 500 baht each for fighting, while the Cambodians were fined 2,000 baht for working illegally, then released.

Vice Governor Somkiet told the meeting that existing laws could be used to rid Kata-Karon of an estimated 400 beach peddlers “who sometimes cause problems and annoy tourists”.

“But we need to consider the fact that they have families to support, so we will choose a softer method and give them a chance to improve first before using the full force of the law,” he said.

After attendees presented their views on the issue, they agreed on a four-step solution:

1. Chalong Police are to arrest any alien peddlers caught working on the beach.

2. All Thai nationals already working as peddlers on the beaches are to register with Karon Municipality. Their number will be limited to 400. After the registration period, no new peddlers will be allowed.

3. Karon Municipality is to draft a set of regulations the peddlers must follow.

4. A meeting, to be attended by representatives of Phuket Provincial Office and other relevant government offices will be held on June 10 to ensure the peddlers understand the regulations clearly.

Karon Municipality has until the end of May to draft the regulations, which are to go into effect following the June 10 meeting.

The success of the new measures would be reviewed after one year, with a meeting to be held on June 10, 2013 to discuss whether the regulations should be extended.

If they are deemed unsuccessful, a crackdown will be conducted and all peddlers caught working on the beach will be arrested.

Vice Governor Somkiet said it would be unrealistic to expect the regulations to be a complete success, but said he hoped for a “60% improvement” as a result.

As for how illegal aliens could be allowed to work in such a highly visible trade, Karon Municipality officer Anurak Yaemklai alleged that they did so with the “involvement” of a certain member of Chalong Police.

On February 6, the day before the big fight, Karon Municipality officers detained four Cambodian beach peddlers and sent them to Chalong Police for processing.

They were fined 2,000 baht each and then released, despite objections by Karon Municipality officials who argued that they needed to be prosecuted and turned over to Immigration Police for deportation.

“The police officer responsible has since been transferred to another district,” he said.

Tambon chief Winai also alleged to the Gazette that some police officers were involved in a racket that allowed aliens to continue to work illegally on the beaches.

Mr Anurak said that his strict enforcement in detaining alien peddlers and handing them over to police had caused him considerable personal problems. In addition to many complaints, he had also received scratches to his car and been falsely accused of attempted murder, he said.

“The municipality has the right to only arrest and fine them. We cannot initiate legal charges as the police can,” Mr Anurak said.

Asked about the current whereabouts of the Cambodians who were arrested and released, Mr Anurak said he suspected they had returned to Patong, where they are known to live together in a rented house.

“If they return to the beaches of Kata and Karon to work, they will again be arrested and turned over to Chalong Police, with a request to be sent to Immigration Police for deportation,” he said.

If anyone knows the history of the beach peddling business in Karon it is Phayom Thongjampi, who arrived in the area 30 years ago at the age of 18 and has been hawking items to foreign tourists ever since.

“I agree with the peddler management system. It will allow officials to control the number of peddlers, because at the moment there are new peddlers arriving and causing trouble,” she said.

The efforts by officials since the brawl had not completely cleared the beaches of illegal alien vendors, she said.

“There are still alien peddlers on the beach, even though there are fewer of them since the fight,” she said.

It was not as easy for municipal officials to know when Cambodians were peddling on the beach because they did not work the sands day-to-day like local peddlers, who are well known to the authorities, she said.

Ms Phayom heard that the influx of Cambodian peddlers from Patong followed one of their members stabbing a Patong policeman, after which they were driven off the beach there, she said.

They also brought in extra reinforcements from Patong for their assault on the Karon peddler, she added.

“About two years ago, a few Cambodians began peddling on the beaches here. One of them was pregnant. We felt sorry for them, so we let them sell here. Later their numbers increased and started to affect our own earnings,” Ms Phayom told the Gazette.

There are now more than 10 Cambodians working the beaches of Kata-Karon, their numbers peaking during the tourism high season, she said.

“This year we have not earned very much due to the bad economy. Last year I earned about 2,000 baht a day during the high season, but this high season I am only averaging about 300 baht to 500 baht a day,” she said.

Cambodians were not the only beach peddlers arrested by Karon Municipality officers, she pointed out.

Ms Phayom welcomes the new regulations because they would end the periodic arresting and fining of Thai peddlers by municipal officials, she said.

“Karon Municipality officers arrest us and fine us 300 baht each time. However, sometimes we manage to run away from them,” said the 48-year-old.

“It’s not easy to live in Phuket because the cost of living is high. Rent and even food are more expensive here than in other provinces. We also need to save money to send back to our families in Ayutt