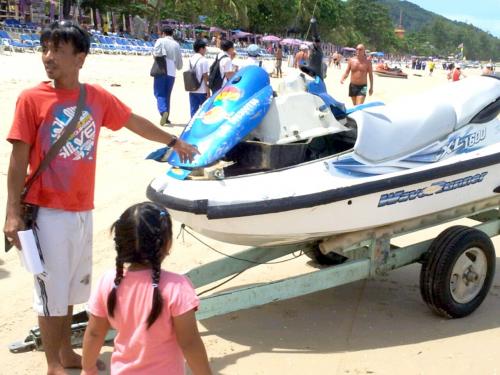 PHUKET: A move by the Phuket Marine Office to enforce a 5-knot speed limit for all boats in Phuket is meeting strong resistance from parasail operators at Patong Beach.

Enforcement of the boat speed limit is aimed at boosting water safety in the wake of a Chinese honeymooner being rendered comatose in a collision between a parasail boat and the rented jet-ski he was riding at Patong Beach (story here).

In response, Phuket Governor Maitri Inthusut met the Chinese tourist’s pregnant wife and promised that action would be taken. He also called an emergency meeting about beach boat safety on Tuesday to hear what steps the Marine Office will take to avoid any similar accidents in the future.

“Jet-skis, as extreme sport machines, are too difficult to regulate. Instead, we will focus on introducing a new ‘vessel management system’ for speedboats,” said Phuket Marine Office chief Phuripat Theerakulpisut.

The new system would require all speedboats operating in Phuket waters to be fitted with electronic motion monitors that log boat speed, direction and GPS location.

“The aim is to ensure that speedboats do not breach the 5-knot speed limit when approaching or departing a transit point, and that includes the beach. All boats will be fitted with devices that transmit real-time data to the Marine Office, but we will focus on parasail speedboats first,” Chief Phuripat said.

“Any captains found speeding will be liable to a 2,000-baht fine for each infringement,” he added.

However, Padungsak Pissadu, the parasail operator at Patong Beach whose speedboat was involved in the accident that sent the Chinese tourist to the hospital, argued that it would be very difficult to comply with the law.

“After that we can slow down as much as we want,” Mr Padungsak said.

“Maybe the Marine Office doesn’t understand this. For us to keep under the speed limit, we need 13 knots of onshore wind to get the parasail off the ground,” he added.

Mr Padungsak said he would continue to operate as usual until the matter is discussed further.

“We will certainly raise this issue with the Marine Office,” Mr Padungsak assured.