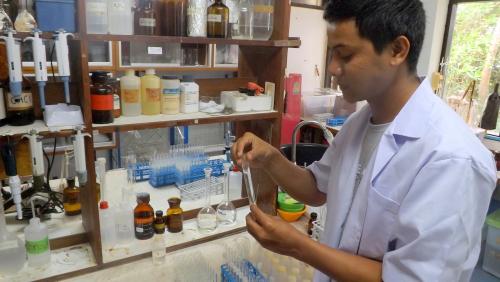 PHUKET: The results of water quality tests conducted on samples collected from Patong Bay amid an “algae bloom” on August 23 will not be available for at least another two weeks, the Phuket Gazette has been told.

The news flies in the face of comments made by Phuket’s leading environment officer, Dr Pornsri Suthanaruk, director of the Phuket-based Regional Environmental Office 15, who at a public event on August 23 said that the results “should be available within a week” (story here).

“We started to carry out the tests on the Patong water samples two days ago,” Daroonwan Schwartz, an oceanographer at the Phuket Marine Biological Center (PMBC), told the Gazette yesterday.

“We have four tests to determine water quality and identify the cause of any contamination, but the bacteria and nutrient tests are the main tests we use. The process will take two weeks,” she said.

Ms Daroonwan explained that the delay in starting the Patong water quality tests was due to the PMBC having to collect samples from Krabi first.

“We have been set a schedule to collect water samples from along the Andaman coast every two months. On August 27, we went to collect samples in Krabi, as per our schedule,” Ms Daroonwan explained.

“If we carried out the tests on the Patong water samples first, we wouldn’t have been able to keep to our schedule and the results from samples collected at other sites would be late too,” she told the Gazette.

The PMBC team took nine days – from August 27 through September 4 – to collect the samples required from “several areas in Krabi”, Ms Daroonwan explained.

However, she did not elaborate on how many sites water samples were collected from, or where they were.

“Also, we have only a few staff to dedicate to this project. They have to collect the samples and conduct the laboratory tests – that also contributes to the test results being late,” she said.

“The water quality results will not be affected by the delay in carrying out the tests,” Ms Daroonwan assured.

“We now have our samples and are working on testing them for water quality. We expect the results for the Patong samples to be revealed within the next two weeks,” she added.