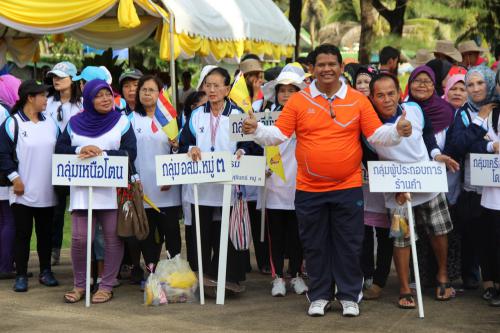 PHUKET: Hundreds of locals from Phuket’s Cherng Talay beach community turned out in force on Saturday to join a cycling and beach cleanup event to celebrate the 86th birthday of HM King Bhumibol Adulyadej on December 5.

Phuket Governor Maitri Inthusut officiated the opening of the event, organized by the Cherng Talay Tambon Administration Organization (OrBorTor), before leading the merit-making ceremony to honor His Majesty.

“In this special event honoring the birthday of His Majesty The King of Thailand, I would like to repeat the words of our king reminding people to be kind, united, honest and fair,” Governor Maitri said.

After leading the crowd of about 600 in paying their respects, Governor Maitri became the first to sign a birthday book for the king, followed by local officials, dignitaries, local residents and visitors.

Proud of their association with the Cherng Talay area, groups massed behind signs identifying themselves as local businesses, community groups and even the local cycling club.

“We wanted to hold an activity to preserve our environment as a gift for His Majesty. The cycling event showed that everyone can use their natural energy instead of petroleum energy. This can save energy for all of Thailand, save money and reduce pollution,” Mr Ma-ann said.

No arrests for work permit delays caused by protests