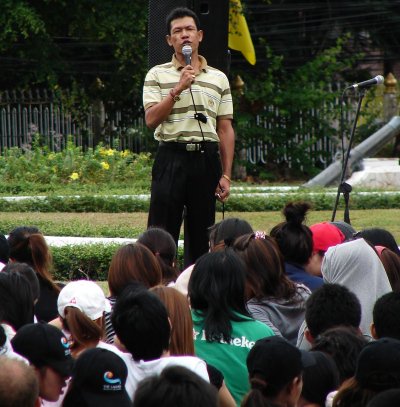 PHUKET: About 500 bar owners and staff from Phuket Town and other popular tourist areas in Muang District gathered at Provincial Hall yesterday to protest the recent crackdown on closing times.

The effort, hot on the heels of a 200-strong protest on Friday, was staged to support protest leader Suratin Lian-udom in his filing of a formal request for night venues in the district to close later than the current 1am curfew.

Mr Suratin is president of the Muang Phuket Entertainment Business Operators Club and Mayor of Rassada, which is in Muang District.

The request seeks to extend the closing time and the legal sale of alcohol to 2am for nightclubs and bars, and to 4am for restaurants offering food and alcohol.

Joining him in leading yesterday’s protest was Niwat Chanajit, owner of Tonight Bar in Kata.

“Tourists always stay quite late in entertainment places. They usually turn up about 11pm, after they have had dinner and a walk on the beach. If we have to close at 1am, it means we have only two hours to do business,” Mr Suratin told the Phuket Gazette.

“The crackdown is affecting not only venue owners, but also bar staff and other people working in related industries, such as motorcycle taxi drivers and street vendors, among others,” he added.

In return for approval of their request, Mr Suratin said bar owners would strictly follow the four other measures included in a Memorandum of Understanding signed between bar operators and Muang District officers on December 27.

The four other measures were for bar owners to: prohibit entry to anyone under 20 years of age; prohibit the use and sale of drugs on their premises and to inform police of any such drug users and dealers; and to prohibit weapons and lewd performances at their venues.

With Governor Tri Augkaradacha unavailable, Vice Governor Weerawat Janpen received the request on his behalf at about 10:30am – about 90 minutes after the protestors arrived en masse at Provincial Hall.

“The officers have to enforce the law because drugs are currently a big problem in Thailand,” he told the protest leaders.

“Phuket is a ‘red zone’ for drugs. Many bars, nightclubs and restaurants are used for conducting drug deals, so restricting bar trading hours helps to reduce crime.”

V/Gov Weerawat said he would pass the request on to the Ministry of Interior and that he would discuss the issue with Governor Tri to determine the best course of action.

He added that he would meet the protest leaders and relevant officers again tomorrow.

The protest leaders asked whether the raids would continue in the meantime.

V/Gov Weerawat explained he did not have the authority to answer that question.

However, he added, “I will discuss this with Governor Tri and other officers involved to come up with the best solution. We want to be friends with the entertainment industry, but at the same time we must do our jobs,” he said.