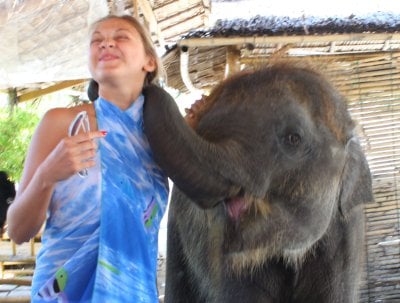 PHUKET: The inspection of elephant camps in Southern Thailand, geared to ensure that all pachyderms on the premises are legal, started on Monday and will include searches of the locations in Phuket where elephants were seized earlier this year.

“DNP and NREC officers are to check the numbers of elephants in each camp and investigate further, should they uncover evidence that might indicate that any of the elephants are being kept illegally,” he said.

The investigation is set to be completed by September 30, Col Watcharin said.

In February this year, Col Watcharin headed the investigation that led to three baby elephants being seized from three different camps in Phuket: the ATV @ Hill Adventure Tour camp on the road to the Big Buddha image in Chalong; the Elephant Camp at the Laguna complex in Cherng Talay; and the PhuThai Souvenir Market in Chalong.

Col Watcharin expected DNA test results to be available by the end of February. That date was pushed back to June, but still Col Watcharin waiting.

“We have not received any DNA test results from the DNP veterinarian team who are conducting them. I met with them in August and asked for an update. They told me they were still working on it,” he told the Gazette.

“I have no idea what the reasons for the delay are, or why we had to seize the baby elephants before the testing was done.”

The DNA tests are expected to prove conclusively whether or not the baby elephants are the offspring of female elephants seized at the Pang Chang Sai Yok Elephant Park in Kanchanaburi province in January.

Col Watcharin added that he was worried that the tests were taking so long.

“If the results reveal that the baby elephants are legal, then the DNP has been wasting their and the camp owners’ time,” he said.