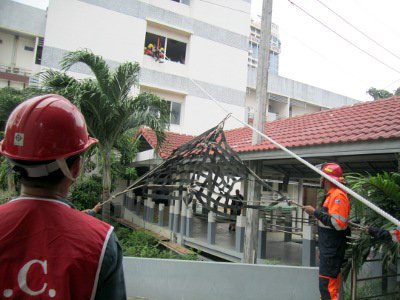 PHUKET: As the rain continued to drench Phuket, staff at Patong Hospital this afternoon staged their annual fire and evacuation drill.

“The exercise simulated a fire starting in a medical storeroom in a building next to the inpatient ward. The flames spread into the recovery ward, forcing us to evacuate the entire inpatient building,” explained Hospital Director Phumin Silapunt.

As part of the exercise, medical staff inside the building attached mock “bed-ridden patients” to a flying fox to evacuate them from the three-storey building.

“The exercise today was impressive. At least we know what to do if we ever have to evacuate our patients and officers from the building, as well as coordinate our efforts with Patong Police and the Patong Municipality Fire Department,” Dr Phumin told the Phuket Gazette.

“Also, the firefighters had the chance to become familiar with the interior layout of the hospital so they will be well prepared should a fire really happen,” he added.

With the current incessant rain on most people’s minds over the past few days, Dr Phumin pointed out to the Gazette that the flood-prevention project at the hospital will start before the end of this month.

“The project will take four months to complete. According to the contract, the construction company has until January 7 to finish the project,” Dr Phumin added.

The flood-defense measures include installing flood barriers, backup systems for electricity and water supply, and an automatic pump system to remove floodwater, as well as raising the level of the hospital car park, which floods regularly.

Asean in Phuket: Immigration to launch fast-track entry for tourists