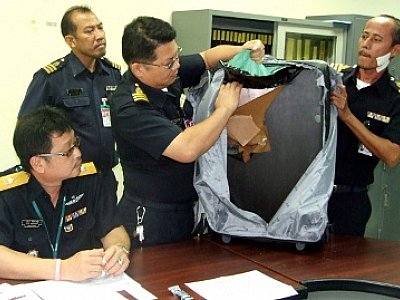 PHUKET: A Thai woman was caught trying to smuggle a record 3.2 kilograms of ya ice (crystal methamphetamine) into Thailand at Phuket International Airport last night.

The haul, valued at 10.5 million baht, was touted to be the biggest meth bust in the airport’s history.

“The suspect was behaving suspiciously while officers were checking her bag with an x-ray machine.

Officers saw something odd in the scan and searched her luggage. They found the ya ice hidden the bag’s lining,” Ms Montira explained.

A chemical test conducted by the officers identified the substance as 100% pure crystal meth, she said.

“We suspect that she [Ratchanee] was working for one of the international drug rings that are now targeting Phuket Airport as a way of smuggling drugs into Thailand,” she said.

Ms Ratchanee, who sat through a police press conference at 10pm last night with her head covered by a denim jacket, denied any knowledge of the drugs.

“I got the luggage from a friend. I first met him about six months ago. My luggage was the small bag [placed] inside the big one. The big one had the ya ice hidden in the lining,” she said.

“My friend asked me to bring it to give to one of his friends in Thailand,” she added.

Ms Ratchanee explained that after she and her new friend had known each other for a while, he asked her to travel out of Thailand.

“He bought me a round-trip ticket,” she said.

“I had no idea what was in the luggage until I was arrested at the airport,” Ms Ratchanee said.

Ms Ratchanee was handed to Tah Chat Chai Police to be charged with possession of a Category 1 drug with intent to sell and with smuggling the drug into the country.

“Her statement is suspicious. We believe she has conducted smuggling many times already.

“Police will have her take a drug test as part of the investigation,” one officer said.

Phuket’s Swedish murder suspects may not do ‘hard’ time