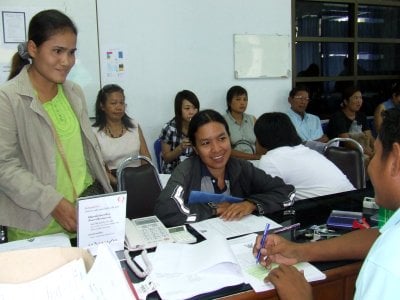 PHUKET: Many of the Burmese citizens working in the construction industry in Phuket are highly educated and “just as talented as Thai people,” according to the owner of a company specializing in legalizing the island’s foreign laborers.

Thanadech Supasuwan, who runs the Noom Broker agency in Rassada, said that the younger generation of Burmese on Phuket aspire to work in fields other than manual labor.

“I have talked to some workers who graduated from Yangon University. I believe that they are just as talented as Thai people are; they have English as a second language. It’s just that their opportunities are limited,” he said.

“However, if the Thai government allows them the opportunity to work in other fields, Thai workers would suffer because the competition would be greater between Thai and Burmese in the future,” he added.

Mr Thanadech started the business 14 years ago to prepare documentation for foreign workers and to coordinate between their employers and government agencies.

At the heart of the process is the “nationality verification”, which requires workers to obtain proof-of-citizenship documents from their home country, he said.

His company helps Burmese laborers verify their nationality by first submitting applications to Phuket Provincial Employment Office. From there it goes to the Bangkok office, to the Embassy of Myanmar Thailand, to Yangon and onward to provincial offices in Burma, he said.

It takes at least two months before identification certificates are returned, he said.

After receiving the documents, he can assist Burmese workers in applying for temporary passports at the Kawthaung (Victoria Point) immigration checkpoint opposite Ranong, Thailand.

It’s a one-day process. Mr Thanadech’s company provides a bus for workers to Ranong, where they cross the border, get temporary passports valid for three years, then receive a two-year non-immigrant visa on re-entry to Thailand, he said.

Once back in Thailand, the workers must report to Phuket Immigration within seven days and apply for a work permit within one month.

Noom Broker takes care of preparing and submitting all of the documents to the Phuket Provincial Employment Office, a process that takes two to three days, he said.

The entire process, starting from nationality verification and ending with work permit issuance, takes approximately three months. Total per-person cost for the entire process, including travel to Ranong, is 500 baht.

General Manager Prathtana Kanjanavanon said, “The process is so complicated and takes so much time. It’s also confusing for employers because the government officers tend to use formal language that is unclear to them.”

According to the Phuket Provincial Employment Office’s latest statistics, there are 4,470 Burmese workers holding passports registered with the office.

Unofficial estimates of the total number of Burmese workers on Phuket go as high as 200,000.

The Burmese community has reacted to the nationality verification process with some suspicion. A major concern is that the Burmese junta would levy excessive taxes against their family members remaining in Burma, as the government assumes workers in Thailand are commanding much higher wages.

Mr Thanadech said that for now, despite the obstacles, “some of the Burmese are delighted to make everything right. They want to work and return home legally. They feel more secure and accepted by being able to go anywhere and do anything they want.”

“Most of them, after getting their passports and work permits, are very happy. They can apply for driving licenses, open bank accounts and catch flights. They don’t want to return to Burma anyway.”

The national verification process will run until the end of February 2011, after which time migrant workers remaining in Thailand without passports will reportedly be sent back to Burma, Cambodia or Laos.