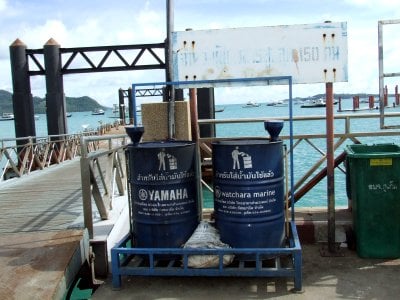 Speaking to a group of boat operators at a meeting at the Chalong Sunrise Restaurant at Chalong Pier on September 25, PPAO Chief Mechanic Wasana Rongphol implored boat owners to dispose of used motor oil properly by using the new containers.

In the past many boat owners drained used engine oil into plastic bags, which they then tied off and left at the pier. People rummaging in search of recyclable materials would then open the bags and the oil would run out into the sea, he said.

The extent of the problem is scientifically documented, he told the group of about 30 businessmen.

The maximum legal limit for the class of petroleum hydrocarbons tested is 5 micrograms per liter of sea water.

PPAO testing of the waters in Chalong Bay ranged from about 40 micrograms last April to as much as 320 micrograms in the rainy season, he said.

Mr Wasana said he initially expected the concentrations to be higher in the dry season, when more boats use the pier.

Greatly increased levels during the rainy season now lead him to believe the main source of the oil is improper disposal of engine oil, as most of the boats in the area undergo annual maintenance at this time of year.

Since the placement of the waste oil drums at the pier a month ago there has been a great decrease in petroleum hydrocarbon concentrations, subsequent testing has revealed.

The plastic drums were provided by Watchara Marine Company Ltd, which sells outboard motors and other Yamaha Marine products in Phuket though a branch office in Koh Kaew.

Sets of waste-oil drums have also been placed at Rawai Pier and at Ao Por, he said.

A set of drums at Rassada Harbour has also been requested, he said.

The waste-oil will be collected by Watchara Marine, which will be able to sell it – provided it is not mixed with other liquids or contaminants, he said.