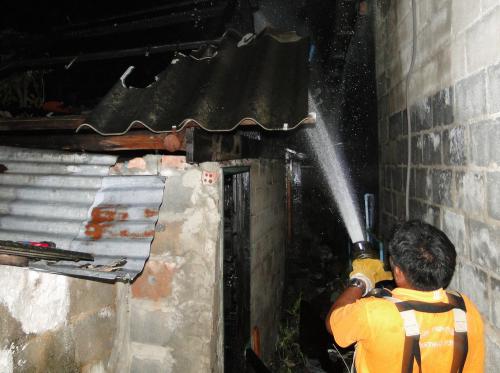 PHUKET: Children playing with firecrackers before the Phuket Vegetarian Festival gets underway this evening have been named as the likely cause of a home in Thalang being gutted by fire.

Two teams of firefighters arrived at the house of Rungtiwa Nuansri, 29, in Thepkrasattri, at about 8pm last night to find her modest home ablaze.

The firemen took about an hour to extinguish the flames, with the help of many local residents who lent a hand.

“We believe the fire was caused by firecrackers. It is impossible for an electrical short circuit to have started the fire because our electricity has been cut off for three days. We had to stay at my parents’ house nearby,” Ms Rungtiwa explained.

Ms Rungtiwa estimated the cost of damage to her belongings at about 30,000 baht.

“Everything in my house was destroyed or damaged by the fire,” she said.

Thalang Police case investigator Chatree Chuwichian, at the scene, said his officers will be looking into the cause of the blaze.

“We have contacted experts to investigate the real cause of the fire,” he said.