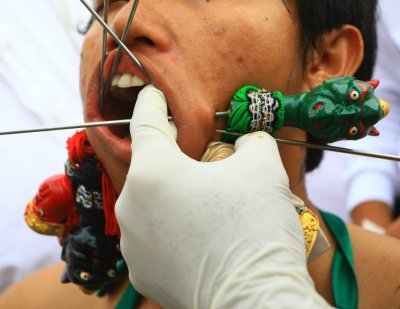 PHUKET: Tourists coming to Phuket for the annual Vegetarian Festival from October 8-16 are expected to pump at least 200 million baht into the local economy during the nine-day festival.

Occupancy rates in Phuket Town stood at 50%-60% on Tuesday, but many hotels in the island’s capital district were already fully booked for the last three days of the event, Wanaphapar Suksombul, Assistant Director at the Tourism Authority of Thailand (TAT) Phuket Office, said yesterday.

TAT-registered hotels and accommodations in beach areas are already enjoying occupancy rates of about 70%, she said.

Ms Wanaphapar said the TAT expected a 10% rise in the number of visitors this year because the event coincides with school vacations in Thailand and the three-day China National Day holiday on Monday that marks the start of a long holiday period in the People’s Republic of China.

Adding to the influx are two more direct flight services to Phuket, both landing on the island for the first time on October 12.

Qatar Airlines inaugural Doha-Kuala Lumpur-Phuket will arrive at 10:25pm, the first of the airline’s six-daily-flights-a-week service.

Ms Wanaphapar added that the bulk of the visitors coming to Phuket were ethnic Chinese from Singapore, Malaysia, Mainland China, Hong Kong and Thailand.

Other important inbound markets during the period are Australia, India and the Middle East, she said.

“Phuket will be more crowded than ever,” she said.

Mr Tawichart announced that in addition to the opening ceremony at Saphan Hin on October 7, there will also be a special Chinese ceremony on October 9 to wish health and happiness to HM King Bhumibol Adulyadej. It will be the first time an official opening event will be held in the event’s 185-year history, he said.

Another first for the festival will be an information center set up near the tin mining monument at Saphan Hin, which will remain open for the duration of the event.

The main attraction of the center will be an exhibition presenting the history of Vegetarian Festival, Mr Tawichart said.

It will also have stalls selling vegetarian fare and distributing free booklets with maps showing where the 17 participating shrines are located and their street procession schedules.

Phuket Shrines Association President Prasert Fakthongphol said he had asked participating shrines to have their mah song (spirit mediums) use only “traditional” objects to pierce their cheeks.

The request reflects the increasing popularity of “modern” objects like beach umbrellas, power drills and motorbike parts in recent years.

Among the traditional items he suggested as the instruments of choice are those mentioned in Chinese legends. Swords, axes, maces and 12-inch spiked-staffs with figurines of Chinese gods as headpieces.

Maintaining this tradition was difficult because some mah song do not register with the shrines.

“They pierce their bodies outside the temples and join the processions on the streets,” he said.