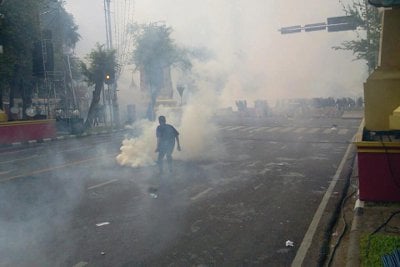 PHUKET: The Royal Thai Police have fired tear gas into the crowds of Pitak Siam protesters gathering in Bangkok in an attempt to stop the mass anti-government rally today.

Apharat Chartchutikumjorn, the Pitak Siam coordinator for Phuket, told the Phuket Gazette by phone this morning that police action started last night, steering groups of protesters away from the main stage area at the Royal Plaza in Dusit.

“Last night they started preventing people from walking towards the main stage area, but this morning they started firing tear gas into the crowds.”

Ms Apharat claimed that the volleys of tear gas canisters began at about 8:50am.

“Many people have been injured. The police drag them away, but we have no idea where they are taking them,” she added.

“As we cannot join the main area, we are forced into smaller groups away from it,” Ms Apharat said.

Prime Minister Yingluck Shinawatra addressed the nation through a televised broadcast on Thursday night to explain that the Government had invoked the Internal Security Act in three areas of Bangkok – effectively declaring martial law in the main areas of the Thai capital.

PM Yingluck said the need for temporary military rule in those areas was needed in order to “preserve democratic rule and to protect civilians.”

Deputy Prime Minister Chalerm Yoobamrung has ordered thousands of police officers to “protect” the area and has tasked national police chief Gen Adul Saengsingkaew to be held personally responsible for “maintaining law and order” in the capital.

Estimates of the number of protesters expected to join the mass rally in Bangkok have ranged from 70,000 to 100,000.

The use of tear gas to disperse crowds comes before any reports of the protesters turning to violence.

It also follows promises by protest leader retired general Boonlert Kaewprasit that the protest would be peaceful, and that the mass rally was not intended to commandeer the streets of Bangkok for an indefinite period, unlike the mass protests in years past.

“Gen Boonlert said that the protest will likely last only one day, maybe two days, but not longer,” Ms Apharat told the Gazette on Thursday.

An estimated 500 Phuket protesters have joined the rally in the capital.

However, Ms Apharat said that number was likely to grow.

“We are now waiting for many more supporters to arrive from the provinces [outside Bangkok]. It is now likely [since the police action] that the protest will last more than two days,” she said.

Phuket Police appeal for help in identifying floating body, possibly that of a foreigner