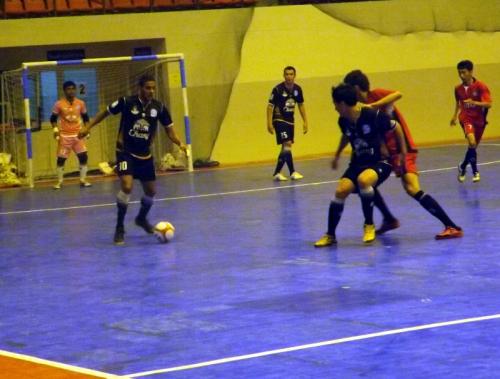 PHUKET: A 4-1 second-half run secured victory for Phuket United (7-4) in their match against Leo Bang Seu on Saturday night in Phuket Town.

Played in front of about 500 fans at the Saphan Hin Indoor Sports Complex, the match was both team’s 20th of the 30-fixture Thai Futsal Premier League 2012-2013 season.

Unquestionably, the man of the match was Phuket’s leading scorer, Jackson Santos, who scored four of the Andaman Pearl’s seven goals.

The Brazilian winger is now the fourth top scorer in the league with 23 goals this season.

The match’s first goal came from Santos in just the second minute of play.

However, Leo Bang Seu was quick to answer and crept ahead 3-1 with goals by Prapaat Yu-samran (3 and 10 minutes) and Su-ruck Soodchieo (8).

Phuket’s Kittipong Son-suwan answered with a goal in the 11th minute, while Santos scored his second goal and the equalizer a minute after that.

The teams went into the locker rooms with a 3-3 deadlock at half time.

It was the home team who came out more refreshed with Kittipong scoring his second of the match in the second minute of the second half.

Two minutes after that, a beautiful pass from Kittipong assisted Santos to complete his hat trick and put the Pearl up 5-3.

The Phuket assault continued with a goal by Akkadet Chuaiklai in the 28th minute.

Leo Bang Seu’s Prapat completed his own hat trick with a goal three minutes later to bring his side back into contention, trailing 4-6.

The visitors brought their keeper out of the nets in a power play, but Phuket’s defense proved solid.

One of Phuket’s shots was caught by the Leo keeper while clearly standing behind the goal line, but the referee did not blow the whistle, which enraged fans.

However, a Phuket counter attack in the 36th minute would settle the score once and for all. Brazilian right-winger Marcos found Santos beating his marker on the opposite side, who then sent his piercing shot under the cross bar – a shot so powerful – it loosened the net from the cross bar.

The referee had to stop play in order to reattach the net but fans were euphoric.

The result moved Phuket up to 8th place with 30 points from 10 wins and the same amount of losses, while Leo Bang Sue remain in the table pits in 15th place.

Phuket are the only team in the 16-team TFPL to not have drawn another team, though there is little doubt that many of their losses could have – should have been draws.

The Pearl boarded a bus on Sunday, bound for Chiang Mai, where they will stay for the next few days to prepare for their next league match on Wednesday against Lampang United, just south of Chiang Mai.

Lampang United are in 7th place of the league with 31 points from 10 wins, a draw and eight losses.

Although the Pearl beat Lampang 7-3 in Phuket early in the New Year, Lampang prevailed in their last meeting, the FA Cup match in which Phuket were eliminated.

Other TFPL results over the weekend

Live Wire – Putting the pieces together