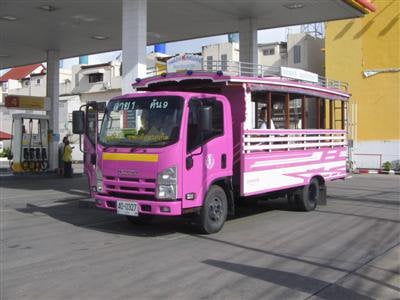 PHUKET: Phuket Town’s fleet of pink buses is about to double in size and an additional route is in the pipeline, according to the provincial council.

Phuket Provincial Administration Organization (PPAO) President Paiboon Upatising said he expects eight more of the pink people movers (known locally as poh thong) to come into service by the end of the month.

Mr Paiboon said he could not specify the date the additional services would begin because the Phuket Land Transport Office had yet to inspect and register the buses.

The first eight pink buses, which began service on two routes in September, have been a big success, Mr Paiboon said.

“We’ve had very good feedback from passengers,” Mr Paiboon said. “We’re getting an income of more than 10,000 baht every day from the buses – even though the service is free for students.”

Plans are now afoot to add a third route from Koh Sireh to Vachira Phuket Hospital in Phuket Town.

Another eight vehicles would be purchased for the route, Mr Paiboon said.

“I will soon hold a meeting with the PPAO committee to set the budget for the eight more buses, which should cost about 10 million baht,” he said.

The pink buses run the same route as the green buses and are similarly priced at just 10 baht per journey.

The PPAO is also improving bus stops along the routes in a bid to get more people using the service.

As a service to our readers, a user-friendly English-language version of the PPAO bus route map will be included as an insert in the January 30 edition of the hard-copy Phuket Gazette, due out Friday afternoon, January 29.

For our story on the launch of the pink buses, click here.

PHUKET OPINION: A prescription for injustice