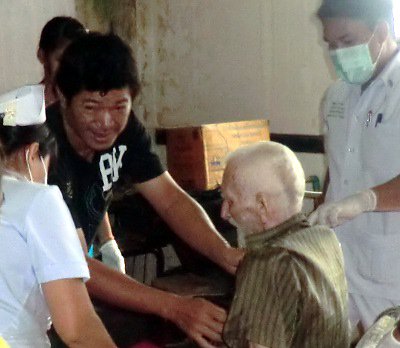 PHUKET: Hans Maeter, the 88-year-old German expat who was moved from Phuket’s famed On On Hotel to Patong Hospital on May 8, is reportedly doing well.

Mr Maeter had been a permanent resident at the On On Hotel in Phuket Town for the past 20 years. The hotel is famed as the Phuket hotel featured in the Leonardo DiCaprio film The Beach.

He was transferred to Patong Hospital after hotel management could no longer stand by and watch him stay in his room, where he has been bedridden for the past year.

The officers arrived at the hotel on Phang Nga Road in Phuket Town at 12:30pm with a Swiss Tourist Police Volunteer and three officers from Patong Hospital, including Hospital Director Dr Phumin Silaphan.

They found the emaciated Mr Maeter lying on his hotel bed, covered with a blanket. After bathing and dressing Mr Maeter, they assisted him into a wheelchair and helped him to an ambulance waiting below.

Mr Anurak, who is also the founder of Phuket International Hospital and the Czech Honorary Consul for Phuket, told the Phuket Gazette, “Mr Maeter could not get off the bed for a year. During that time our hotel maid cleaned his room and brought him food and drink, but he could not eat much.

“He refused to go a hospital or stay anywhere else. He said he wanted to die here,” he said.

“We contacted Mr Maeter’s family in Germany and his friends in Phuket, but he declined any help from them,” Mr Anurak added.

With a full renovation of the hotel scheduled to start on May 1, Mr Maeter was the last guest to check out.

“We couldn’t leave him in the hotel. He needed to be moved to a hospital where he could receive proper care,” Mr Anurak said.

Officers received a surprise while gathering Mr Maeter’s belongings to take with him to hospital, Sen Sgt Maj Wichai said.

“While we were collecting his belongings, we found more than 100,000 baht in Thai baht and US dollar banknotes. We have already opened a bank account for him to keep his money safe in the bank.

“We also found a bankbook in his room showing that he has more than 1.2 million baht in his own bank account,” Sen Sgt Maj Wichai said.

Mr Anurak has volunteered to keep Mr Maeter’s belongings safe and to pay for his hospital treatment until the German Embassy in Bangkok is contacted and assists in making alternative arrangements, Sgt Payong explained.

A source familiar with the case said the Embassy was aware of the situation, but could not intervene because no laws were being broken.

Before Mr Maeter’s debilitating condition set in, he returned home to Germany several times during his many years of stay at the hotel, Mr Anurak recalled.

“Later he was unable to go anywhere, so he stayed in the hotel all the time,” he said.

Despite his condition, Mr Maeter managed to obtain a new passport from the German Embassy with an issue date of February 12 this year. The passport lists his place and date of birth as Stettin, Germany in 1923. The town, now known as Szczecin, lies in Poland’s Baltic region.

The On On Hotel, which at 85 years old is reputedly the oldest hotel in operation in Phuket, will undergo renovation work into next year, said Mr Anurak.

“We will hand over the operations to another Thai hotel operator, but the name and style of the On On Hotel will remain the same,” Mr Anurak said.

The renovations will see an upgrade in the style and comfort, as well as an increase in the number of rooms, he said.

“However, we will have to increase the room rates a little bit to ensure the prices keep pace with current times,” Mr Anurak said.

“He is strong and can now feed himself,” said one hospital staffer.

Patong Hospital Director Dr Phumin Silaphan previously told the Gazette, “He is fine at the hospital now. He does not need any special treatment as he is not ill.”

Hospital administrators have contacted the German Embassy in Bangkok in order to plan Mr Maeter’s future.

“Mr Maeter received a phone call from a foundation in Germany [on Wednesday]. However, we do not know what transpired doing that conversation,” the hospital staffer told the Gazette.

Despite the large sums of money in both cash and in bank accounts recovered from his hotel room, Dr Phumin noted that Mr Maeter had no medical insurance.

“Right now… all we can do is take care of him as best we can,” he added.

This story was originally published in the May 12-18, 2012 hardcopy issue of the Phuket Gazette.