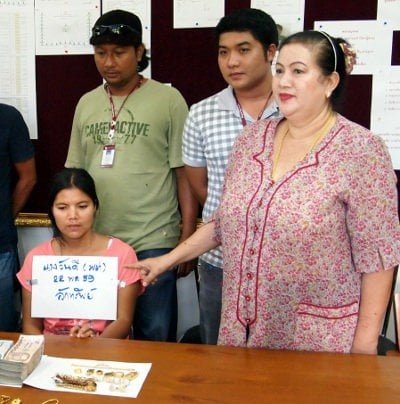 PHUKET: A Burmese maid in Phuket who stole about two million baht in cash, diamonds and jewelry from an ex-employer’s house on Monday was captured by the Phuket Provincial Police early this week.

The maid, 32-year-old Sandar Win Wan Dee, was tracked down to room number “666” of an unnamed guest house on Soi Patong Whiskey on Monday afternoon.

She was caught in possession of a brown purse that contained many of the stolen items, Deputy Superintendent Serm Kwannimit told a press conference at Phuket Provincial Police Headquarters on Wednesday afternoon.

Yupa Waiyasit, 52, filed a complaint with the Phuket Provincial Police on Monday after she realized she had been robbed.

“She worked for me as a maid five or six months ago, but left after less than a month, claiming she wanted to go back home,” Ms Yupa explained.

“I suspected she might be the thief because she knew the house well and where I kept my valuables,” she said.

The suspect confessed that she planned to leave Thailand yesterday, he added.

The items recovered were returned to Ms Yupa, but some items had already been sold to gold shops in Patong and Phuket Town, he explained.

Lt Col Serm stressed the importance of keeping records of employees’ personal identification information in case they need to be tracked down.