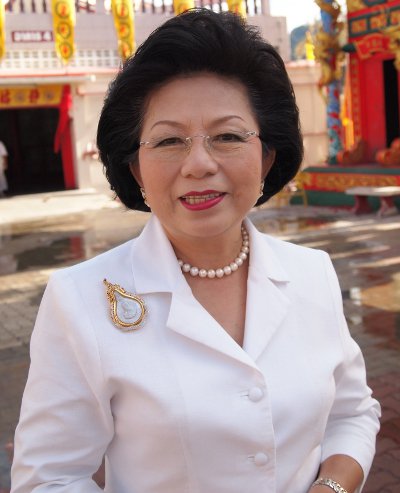 They are also calling for all scrap metal merchants to be on the lookout for any scrap being sold that suspiciously looks like the ramps used to allow vehicles to ascend curbs and be parked in inner-city garages.

The warnings come after 10 municipal water meters have been reported stolen this month alone.

Phuket City Mayor Somjai Suwansupana said the incidents had been reported to Phuket City Police, who have yet to make a breakthrough in their investigations.

“Local residents believe the thieves come late at night or very early in the morning, mainly because most them who have had their meters stolen went to bed knowing that their water meters were still there, but when they woke up in the morning, they were gone,” she said.

“I have also contacted the scrap metal merchants and secondhand stores for any information about people wanting to sell water meters or mobile metal ramps,” she added.

“Those who want to sell such items must present their national identification cards and give all details on the card to the shop owner,” she explained.

“Phuket Town suffered a similar spate of thefts several years ago. The police monitored the situation closely and arrested many people for stealing water meters. The situation improved, but now the problem has returned,” said Ms Somjai.

“I urge all residents to keep their eyes open. Everyone should help look out for public utilities as if they were their own,” she added.

Those who have already had the water meters stolen must file a police report and present that report to the Provincial Water Authority in order to apply for a new meter, Mayor Somjai explained.

“The owner of the house has to pay at least 1,000 baht to have a new water meter installed,” she added.