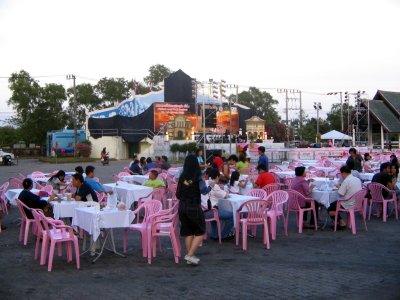 PHUKET: Foul smells, litter strewn throughout the area and a downturn in local trade were named as three of the biggest problems arising from large-scale events being held at the Saphan Hin central stage area, officials were told on Wednesday.

Located at the Tin Mining Monument roundabout, the stage and its large brick-paved open area (about the size of a football field) plays host to more than 10 major events every year.

Surrounded by casuarina trees, the Saphan Hin stage area includes the stage itself, with bathrooms and changing areas beneath, and a Thai-style pavilion beside it.

Responsibility for the area falls to the Phuket City Municipality’s Department of Education.

Almost all of the events held there offer visitors a wide variety of food and beverages, typically including alcohol. Among the major events are the Red Cross Festival, the Prison Products Fair, a Plant Fair, the Andaman Halal Fair and the Local Food Fair.

But at a meeting at Phuket City Hall on Wednesday, Phuket Vice-Governor Teerayut Eimtrakul heard that the number of events held in the area was causing problems for local residents, who complained of pollution and a downturn in trade when events are underway.

Full-time vendors at Saphan Hin, who have rental agreements with the municipality, also complained about a lack of trade when these festivals are underway.

The events are held too frequently and last too long, they said.

The stink annoys people who come to the park to exercise, they added.

City officials explained that event organizers often did not uphold the terms of the agreement under which events are staged there.

V/Gov Teerayut suggested relocating some of the commercial events to Patong, either to Loma Park or the football field across the street, where many large events are held.

However, the only tangible result of the meeting was the decision to set up a committee to ensure better compliance by event organizers so that local residents would not have to suffer so much.

Phuket City Municipality will be in charge of selecting the committee members, who will come from various departments involved with event management, V/Gov Teerayut said.

Event organizers must already place a damage deposit with the municipality before the event.

They must also submit a written request to the municipality no less than seven days before the event starts, including a timetable of activities and a layout plan for the stalls and other attractions.

However, such fees can be waived at the discretion of the municipality depending on the nature of the event, he said.