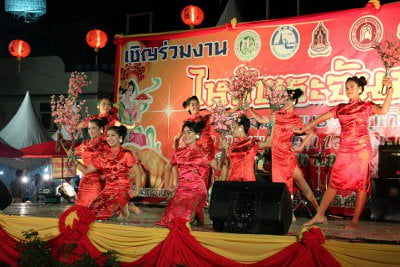 The Moon Festival, also known in China as the Mid-Autumn Festival, started yesterday at Queen Sirikit Park in Phuket Town will run until tomorrow evening.

“The Moon Festival has existed for centuries. This festival is important to Chinese people because many of their celebrations are connected with the moon,” said Phuket City Mayor Somjai Suwansupana in opening the festival yesterday.

“This year the event falls on Sunday. People will pay respect to the moon with fruits, peanuts and moon cake,” she added.

In Chinese culture, apart from the practice of giving mooncakes to family and friends, there are other regional traditions.

In some parts of China, the festival is also used for matchmaking. Dances are held for young men and women to find partners. Young women are encouraged to throw their handkerchiefs to the crowd. The young man who catches and returns the handkerchief has a chance of romance.

Mayor Somjai explained that many Phuketians who had either settled oversees or lived in other provinces will come back to visit their parents, visit temples and eat mooncake together.

“The aim of the festival is to preserve the culture and tradition of Phuket, which we want to keep. During the Moon Festival, several kinds of mooncake along with local dishes will be on sale at many places,” she added.

Mayor Somjai invited one and all to join a tribute ceremony starting at 20:49pm on Sunday to honor HM King Bhumibol Adulyadej on the occasion of his 85th birthday.