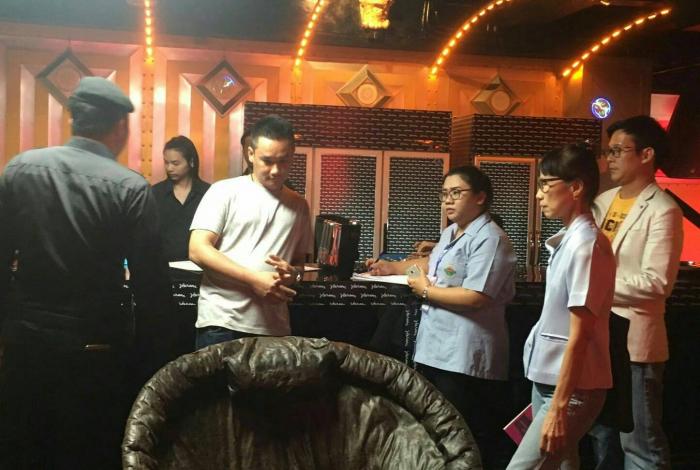 At 12:30am, the officers paid a visit to the venue Harem, located on Phang Nga Road in Talad Yai, where they found alcohol still being served to customers.

Regulations allow entertainment venues to open until 1am but forbid them from selling alcohol after midnight.

“Sayampoo Seeyotha claimed to be the venue’s manager, but when we asked to see the business licence, he could not produce it. He was charged for operating a bar without a licence and selling alcohol after-hours,” Maj Purimpat told the Gazette.

Later, at 1:15am, the officers raided a bar called Duzz, located on Mae Luan Road, at the foot of Rang Hill.

“The Duzz bar had a proper licence, which was registered by 76-year-old Suchart Limpanon, allowing it to open from 6pm to 1am,” said Maj Purimpat.

However, inspectors discovered a receipt for alcohol sales with a 0:41 time stamp.

The manager, Chanu Jitman, could not contact Mr Suchart so the licence holder was charged in his absence for trading after-hours, witnessed by Mr Chanu.

Dr Prapa Nakara, director of the Phuket Provincial Health Office Non-communicable Diseases Division, who took part in the raids, said she was concerned about after-hours trading and illegally promoting smoking at nightlife venues.

“As well as clamping down on after-hours alcohol trading, we want to ensure entertainment venues are not allowing smoking,” said Dr Prapa