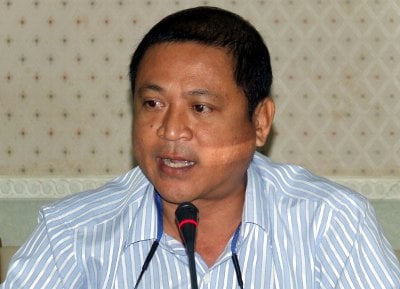 PHUKET: Phuket Tourist Association (PTA) Vice President Bhuritt Maswongsa has lashed out against local authorities for their failure to stop taxi drivers from dictating to Phuket resorts who can and who cannot pick up guests from their hotels.

Mr Bhuritt’s rail against the Phuket regime of “transport cooperatives” comes after a driver was refused entry to the Naithonburi Beach Resort to pick up two Russian tourists on Tuesday.

“I have heard about the blockade at the Naithonburi. I do not know much about it in detail, but I do know that last week the PTA received a written complaint from a tour agency,” Mr Bhuritt told the Phuket Gazette.

According to the complaint, local taxi drivers specifically listed 26 tour companies that are allowed to collect guests from the resort, but drivers or representatives from any other companies are refused entry by the taxi drivers who guard the “checkpoint”.

“The officials who should be taking responsibility for this problem have not stepped up to say this is against the law,” he said.

“They should take action about the checkpoint on the public road – it is against the law. They should be acting against this kind of activity, which I would call ‘unlawful occupation’,” he explained.

“Months ago, Interior Ministry Deputy Permanent Secretary Pranai Suwannarat came to Phuket to personally hear what can be done about tourists being cheated.”

“Now he is the Permanent Secretary at the Interior Ministry and still nothing has changed,” he said.