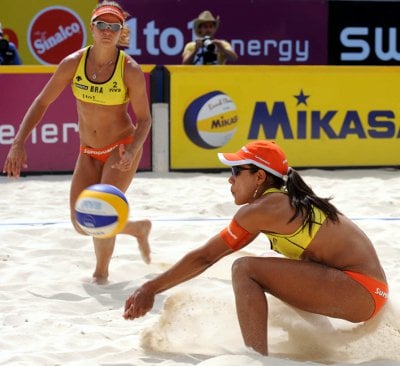 PHUKET: Larissa Franca and Juliana Felisberta Da Silva of Brazil, currently the world’s number-one women’s beach volleyball team, have been ranked as top seeds for the US$190,000 Phuket Thailand Open.

The tournament, with PTT as the main sponsor, is the last stop on the 2010 Swatch FIVB Beach Volley World Tour to be held on Karon Beach November 2 to 7.

The Brazilian teams missed last year’s tournament in Phuket, but are coming in 2010 with a strong line-up including four teams in the main draw.

Seeded second are another in-form team, the Chinese pairing of Xue and Zhang Xi, who have made podium finishes in their last four World Tour tournaments and have two wins to their credit this year.

The German pair of Goller and Ludwig, are seeded third, with reigning Olympic Champions Kerry Walsh and Nicole Branagh as fourth seeds.

The 2009 Phuket Open winners and current World Champions April Ross and Jennifer Kessy-Boss are also competing in this year’s tournament.

Another three teams from Thailand will be participating in the qualifying tournament.

Matches will be played from 9am daily on November 3 to 6, with the finals starting at 3pm on November 7.

The state-run NBT television network will broadcast the semi-finals and finals live:

The beer sponsor is Federbrau.

The Phuket Gazette is once again a proud sponsor of this exciting event, which is the last of the year on the FIVB women’s world tour.