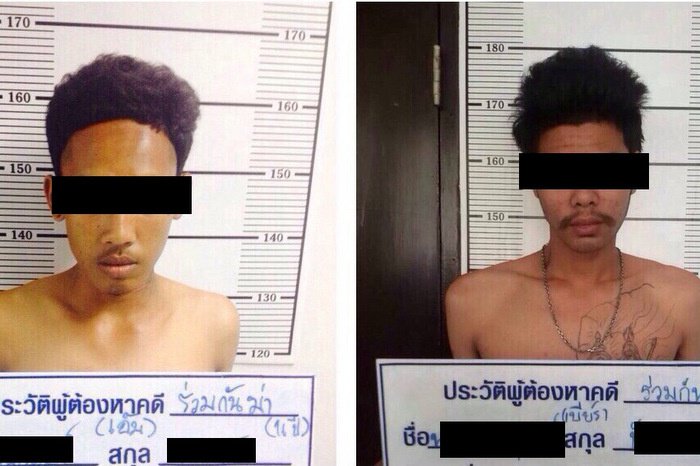 PHUKET: Two of the six suspects of a drive-by shooting near the Governor’s House in Phuket Town on New Year’s Eve surrendered to police last night, escorted by their parents.

The six are wanted for the fatal shooting of 15-year-old Sakorn Nitipoj on Wednesday night.

The attack began in front of the Governor’s House on Narisorn Road. While fleeing his attackers, Sakorn fell and died from a gunshot wound outside the Ministry of Finance office (story here).

Police declined to reveal the suspects’ names as they are all minors, and instead used only nicknames in reporting the surrender.

“Mr Beer and Mr M surrendered to us at about 8:30pm, accompanied by their parents,” said Phuket City Police Superintendent Sermphan Sirikong.

“We have information about each of the six suspects. We contacted their parents and asked them to bring their children in before we are forced to go and arrest them.”

Police believe the remaining four suspects are still in Phuket.

“Our investigation team will apprehend them as soon as possible,” Col Sermphan added.

Phuket Provincial Police Commander Patchara Boonyasit at the scene of the shooting on Wednesday said police believe the attack was motivated by revenge and that they were pursuing that line of investigation (story here).

Tourism, martial law: Looking back at Phuket in 2014