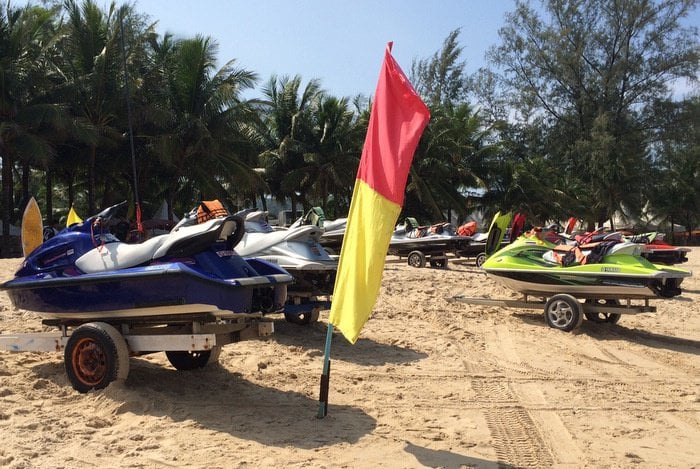 PHUKET: In response to an Israeli man suffering injuries in a jet-ski accident at Patong Beach earlier this week, police have urged tourists to be more careful while riding the machines.

However, no action will be taken to avoid a similar accident from occurring again at Patong, Phuket’s busiest tourist beach.

Two Israeli brothers reportedly hired separate jet-skis at Patong on Tuesday, then collided with each other about 800 meters offshore.

A passing longtail boat was able to assist the brother who was injured in the collision to shore and emergency services subsequently took him to Patong Hospital. The man has since been discharged.

Patong Police are aware of the accident, but have no details as no formal complaint had been filed over the incident, explained Patong Police inspector Pratuang Polmana.

“On the afternoon of December 30, a jet-ski operator came to report the collision,” Col Pratuang confirmed to the Phuket Gazette.

“I asked the operator for more information and for their [the tourists’] passports and learned that the two brothers are from Israel and are here with their father.

“I did not pursue the case because no official complaint had been filed. I assumed that the father may have not wanted to make a big deal of the accident and that the two parties had sorted out an agreement over the crash.”

The best way to avoid a jet-ski accident is not to rent one, said Col Pratuang.

“If you are not familiar with jet-skis the likelihood of having an accident is greater so the best way to avoid an accident is not to ride one,” he said.

“It is like driving a car. If you are not experienced please don’t do it and remember that even experienced drivers sometimes have accidents.”

However, Col Pratuang did not elaborate on the current existing – but long ignored – requirement by law that all people including tourists who rent jet-skis must have a Thai Helmsman Level 2 license, a qualification that requires two years’ documented proof of experience aboard a Thai-flagged ship.

In 2004, then newly-appointed Phuket Marine Office (PMO) Chief Kritpetch Chaichuay told the Gazette that he felt it would be “impractical” to enforce the long-ignored regulation.

PMO chief Kritpetch acknowledged that any tourists caught operating a jet-ski without a Helmsman’s 2 license should in theory be liable to six months in prison, a 5,000-baht fine, or both – but said it would be impractical to enforce such a law because it would mean the immediate death of the jet-ski rental business in Phuket (story here).

“We told them to be careful. When they collided there was nothing we could do, but we did contact emergency services to take the injured man to Patong Hospital,” he said.

“He has already been discharged from hospital and the damage has been sorted out by the jet-ski insurance.”

As recently as November 3, Russian tourist Iliya Muryndin, 29, died after suffering head injuries in a fall from a jet-ski he had rented at Patong Beach (story here).