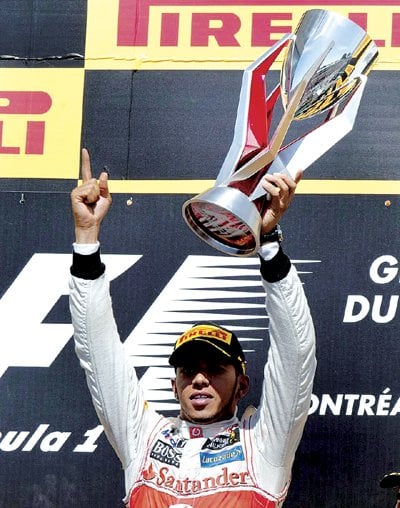 PHUKET: THE Canadian GP was a magnificent race for Hamilton. Team strategy was absolutely right, and the driving was superb. The decider was tyre strategy. Vettel and Alonso ran a one-stop strategy for Red Bull and Ferrari respectively, while most drivers went for a two stopper.

The strategic question was whether the time and track position gained by saving a pit stop would outweigh inevitable late-race problems with tyre degradation. Now we all know the answer; it does, but only if you have a very special car.

Hamilton knew he could not one-stop, and used Vettel and Alonso’s one-stop strategy to ensure a win. Vettel used his first set of tyres hungrily going for speed in qualifying to gain pole, and in the early laps of the race to protect his position.

So he had to pit early and cede the lead to Hamilton. That left Alonso to deal with. Alonso planned to one-stop, and therefore needed to protect his second place and wait for McLaren to pit in order to take the lead.

So Hamilton was able to stretch his lead while Alonso held up the cars behind him. When Hamilton pitted for a second time, he was able to return to track with fresh boots and easily overtake Vettel and Alonso with DRS assistance and sheer straight line speed.

So the race was about Hamilton, Vettel and Alonso? Well not quite.

Vettel slid down the order with failed tyres and was forced to convert to a hopeless last minute two-stopper. That left him in fourth. Alonso stayed on his exhausted tyres and came in fifth and this opened a window for two other one-stoppers.

Grosjean’s Lotus and Sergio Perez’s Sauber, showed what magnificent combinations of man and machine they are, managing to one-stop and come second and third respectively with tyres still looking remarkably fresh.

Rosberg had a reasonable run for Mercedes but Schumacher retired again and I have an ominous sense of déjà vu, remembering Stirling Moss and all those retirements in his final 1961 season.

Lotus continued to do everything but win. Grosjean was second; Räikkönen was adequate coming from twelfth on the grid to eighth, and now Lotus has to be looking for pole in Valencia.

Button’s lacklustre performance for McLaren is strange. Hamilton is supposed to be the driver who is hard on tyres, but it was Button (last year’s winner) who suffered massive tyre degradation, who was lapped by Hamilton and came in a dire sixteenth. He described himself as “confused and very lost”.

Ferrari still does not have a winning car, and Massa came in tenth after a spin.

The other teams were quite unremarkable. But the Drivers’ Championship is now wide open, Hamilton, Alonso and Vettel lead, but Vettel is dropping inexorably. There are twenty-two drivers in the chase and Grosjean is firmly in the big league.

Two weeks ago I said that the Montreal circuit was named after the only Canadian to win the Drivers’ Championship, Gilles Villeneuve. The circuit is named after him, and Enzo Ferrari’s Piccolo Canadese is perhaps the greatest driver ever.

But as a reader has pointed out quite correctly, Gilles never won the Drivers’ Championship. He came second in 1979 with very strong late-season showings. He was favorite to win the 1980 Championship but the 1980 and 1981 Ferraris were a disaster and of course Gilles was killed in qualifying in 1982.

His son, Jacques won the 1997 Championship in a Williams. The threat of a Montreal student demonstration was successfully squashed by authorities and my television unhappily failed to show the nude marches.

So it’s on to a European GP this weekend with almost no overtaking opportunities. I know of only four F1 overtakings on the Valencia circuit since the first GP in 2008. Like Monaco, the race is about qualifying and strategy.