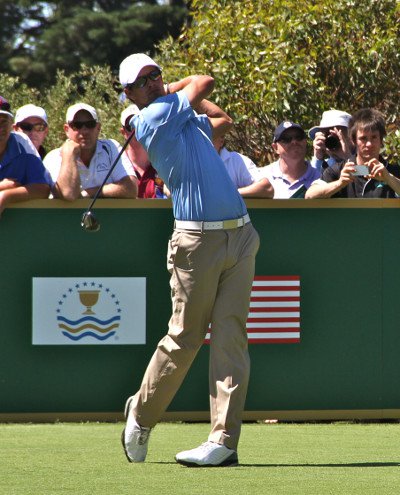 PHUKET: Kingston Heath Golf Club was the venue for the Australian Masters last week. The course is the ‘pride of the sand belt’ in Victoria.

Adam Scott and Ian Poulter were the two highest world ranking players at number 5 and number 13 respectively. Going into the last round, Scott was 12-under and Poulter 13-under.

With home crowd advantage and putting better than Poulter, could Adam Scott put the disappointment of losing the Open Championship 2012 behind him?

Scott was the hotter of the two out of the blocks, birdying the first two holes and making three birdies in a row to score16 under. Poulter made three birdies and one bogey to card 15-under-par – one behind.

On the back nine things didn’t go the Englishman’s way, dropping shots on two par fives pretty much handed the title to Scott, who held his nerve with steady pars and a birdie on the last hole to win.

Scott finished on 17-under-par for the week, four shots ahead of Poulter. This was the first time Scott had won the Australian Masters, which delighted his Australian fans.

At the Hong Kong Golf Club Fanling golf course, Michael Campbell and Miguel Angel Jimenez were both tied at 10-under-par going into the last round.

Michael Campbell has had a difficult time on the golf course since winning the US open in 2005. His form seems to be returning as of late, but he was no match for Jimenez, who had 16 putts in the first 11 holes to take firm control of the USB Hong Kong Open.

Anderssen Hed was also in contention finishing on 14-under with a last round 64.

Jimenez pared the last hole to finish on 15-under-par to win the Hong Kong Open for the 3rd time – becoming the oldest player, at 48-years-old, to win a European tournament.

Henrik Stenson came out on top finishing with 17-under-par to win for the first time in five years.

In Japan, Luke Donald won the Dunlop Phoenix Open to move back to the number two ranked player in the world.

Tip of the week – Sweep the ball from the rough for more distance.
Most golfers who go in to the rough think they have to dig their golf ball out, but this is not necessarily true.

If your golf ball is sitting on top of the rough or half the golf ball is showing and you want distance, you can just play your normal golf swing and let the golf club head sweep through.

Nowadays we have hybrid golf clubs that are specifically designed to get the ball out of the rough, due to the way the bottom of the golf club is made. So next time you are in the rough try to imagine that you are playing your shot from the fairway and let the golf club do all the work.

If you don’t want to go into the rough, come and see me for golf lessons at The Golf Guru international golf academy, with special promotions currently available.