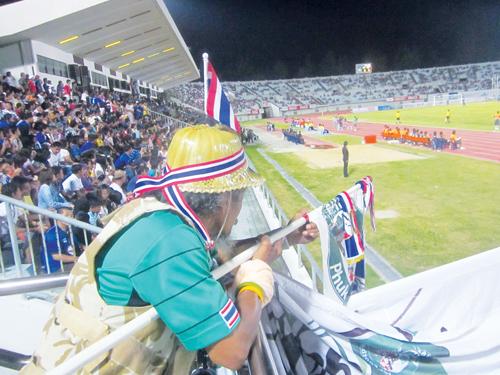 Of this amount, Phuket FC were fined 5,000 baht for only having one ambulance at its first home match against Bangkok FC (click here for match report).

The TPL requires the home team to have at least two ambulances readily available.

YL1 newcomers, Rayong FC were fined 10,000 baht for their players accumulating six yellow cards in their match against Ayuthaya FC.

Ayuthaya, the 2012 division 2 champions, were also fined 20,000 baht after their fans threw bottles onto the pitch during that same match, which finished 0-0.

Following Rayong’s season opener, a 1-2 loss to Airforce Utd, Rayong FC fans physically assaulted an official when he tried to leave the stadium, also causing damage to his car.

In addition to the fines, Rayong FC will also be held accountable for damages to the official and his car, on top of fans being banned from attending the team’s next two home matches.

The TPL requires teams to have on hand at least 10 security officials for every 1,000 fans.

The TPL also fined Khon Kaen FC 20,000 baht for its fans using vulgar language aimed at the officials. Khon Kaen, who drew 1-1 with Trat FC in that match, were also given a warning letter stating that its stadium was not up to the required standard for league competition.

Also fined 20,000 baht because of the foul-mouth behavior of their fans was Navy FC in their 0-1 loss to Saraburi FC.

It should be noted that bottle throwing and rowdy, sometimes violent fans, are most commonly seen in teams that only recently got promoted from the highly competitive Division 2 regional leagues.

Even Phuket FC had similar problems with its fans in the 2011 season (as FC Phuket), when it first got promoted to Division 1.

After being bombarded with fines, and enforcing a ban on bottles and cans being brought inside the stadium, those flying bottle days are a thing of the past.