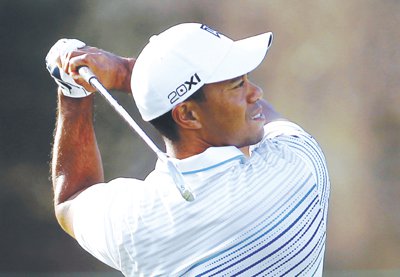 PHUKET: Twelve months after ending a two-year victory drought at the tournament he hosts, Tiger Woods is excited about his prospects for 2013 as he prepares to defend his World Challenge title this week.

His one-shot triumph over fellow American Zach Johnson at last year’s World Challenge set the tone for a successful 2012 PGA tour campaign highlighted by three wins, the only disappointment being his continued barren run in the majors.

“I’m very excited because last year at this point in time I was still not quite where I wanted to be physically,” Woods, who has battled assorted knee injuries during his career, told reporters at Sherwood Country Club.

“This year has been fantastic in that regard. I’ve felt good. I’ve played a full schedule for the first time in a very long time, and I’m just very pleased with what I’ve done overall with my game.

“At the outset of the year I didn’t really putt well. Towards the end of the year I really started putting well. My short game has really come around… I am becoming more consistent.”

Woods won his 72nd PGA tour title at the Arnold Palmer Invitational in March, then followed up with victories at the Memorial tournament and AT&T National.

However, he has not triumphed in the majors since the 2008 US Open at Torrey Pines and has set his sights on removing that blemish from his otherwise glittering record during his 2013 campaign.

“I’ve had some really nice years, some really good years in there, but winning a major championship just takes it to a whole new level,” said Woods, who will celebrate his 37th birthday next month.

“I know how it feels when you win a major championship, and it feels incredible. It lasts with you, and that’s something that I would like to have happen again.

Woods has fond memories of his World Challenge victory last year at Sherwood where he birdied the last two holes to snatch a one-shot win from Johnson.

“I hadn’t won in a little bit there, and it was nice to not only win but to go head-to-head against Zach and to do it the way I did,” the 14-times major champion said. “I had to earn it.

“Against a guy like Zach, he’s not going to go away. That really started the year off for me on a positive note, and consequently I ended up winning three times this year.

“But there are always things we need to work on, and this off-season we have a list of things we want to get done. That’ll start probably a couple of weeks after this event.”

Woods, who has been working with coach Sean Foley on the fourth swing change of his professional career, faces a strong field this week in the US$5 million invitational event.