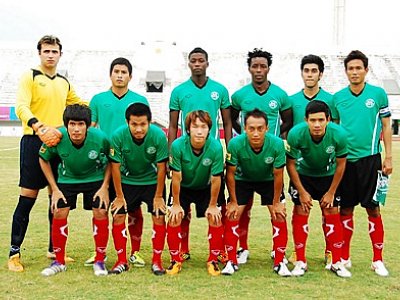 Rangsit’s planned home pitch for this season will be at North Krungthep University, but the Phuket Gazette has learned that the stadium is currently unavailable due to ongoing construction upgrades.

Despite a redundant scoreboard, the uncontested winners to prevail from Saturday’s affair were Phuket’s travel-weary cheer squad “The Hulk”.

“I am satisfied with the result, because we did not lose,” Ibrahim Kanoute told the Phuket Gazette after the match.

“Now I will keep trying to improve my game so we can win,” he added.

Having previously played for PTT Rayong, and on loan from Muangthong United, Ibrahim showed that he will certainly be an asset for the season with his attacking flair and strong physical presence on the pitch.

Another treat for FC Phuket’s fans was new Brazilian goalkeeper Alonso Jose Carvalho da Silva, who made a number of critical saves to foil a few of Rangsit’s rasping drives and counter-attacks

Following the match, Alonso told the Gazette that he was not disappointed in the result.

He admitted that he is still feeling some regret for having to leave to his former premier league side, Chiang Rai United.

“After losing only four matches of the 25 I played with Chiang Rai, I had begun to gain many fans in Chiang Rai. It is sad, but I must look on.”

“I want to win, and I think we have a very strong team in Phuket with many good players. I’m looking forward to winning and playing in Phuket,” he said.

Alonso showed that he has strong command of his back line, who is still led by defender Nenebi Tre Sylvestre, the only non-Thai player to be retained by FC Phuket from last season.

An idol among fans, the Ivorian joined the fan’s bus back to Phuket after the match on Saturday, while his teammates opted to recover at their hotel in Bangkok one more night before returning home.

Fans will get their next chance to see the entire new-look FC Phuket this Saturday, as they begin their home fixtures schedule at Surakul Stadium against Rajpracha FC.

Other TPL Yamaha 1 results over the weekend included three other Southern Thai sides who were notably victorious in their season openers as follows: