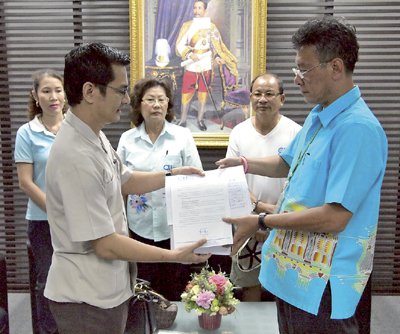 PHUKET: Rassada residents scored a goal by benching the plans for Rassada futsal field in Phuket’s Kanjanapisek Park until a public hearing can be scheduled.

A letter of complaint was filed by local residents against the development of the Rassada futsal field to Rassada Municipality Administrative Office (OrBorTor) Chief Dechakanee Leelanont.

“We will have less area for exercising because the field will be for futsal players only, which is in conflict with the original goal for the park,” said Keharassada Phuket Credit Cooperative manager Chainarong Nhujeenseng.

“The residents in Rassada Moo 7 were not notified about the project until we heard that it was about to be built,” he continued.

Mr Chainarong praised the Rassada municipality for focusing on a project concerning people’s health, but felt the best way to invest taxpayer’s money was to incorporate their opinions and needs.

“The project should come from the requests of residents, otherwise it will cause arguments within the community.

“We should be part of the decision making process because the money being spent is from our taxes,” Mr Chainarong said.

“The project will be held back. Then we will have a public hearing for it,” OrBorTor Chief Dechakanee concluded after receiving the letter.

Phuket Sports: Pulsating play in round six of PSSL