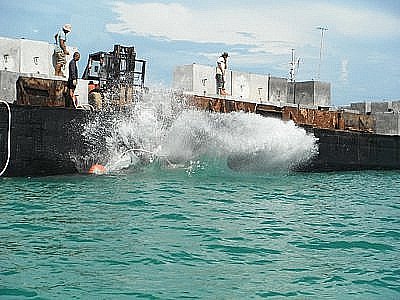 PHUKET: The Marine Department is spending 5.8 million baht on installing 300 moorings in coastal havens off Phuket in order to protect coral reefs.

“We dropped 200 moorings in Chalong Bay on Saturday. They are available to use now, for free,” Phuket Marine Office chief Phuripat Theerakulpisut told the Phuket Gazette today.

“We will drop another 100 moorings in Ao Por this Saturday [December 1],” he added.

“It is an important project that helps prevent coral reefs in the area being damaged by boats dropping anchors on them,” Chief Phuripat explained.

Each mooring is anchored to the seabed by a block weighing about 2.5 tons.

“This should be enough to allow boats of up to 100 tons to tie up to them. Normally, an anchor of a boat weighs about 100 kilograms,” Mr Phuripat said.

“I cannot tell you exactly how far apart they are from each as that depends on the marine topography,” he added.

Phuket Sports: PIST hooks all as Sunshine Village cleans up