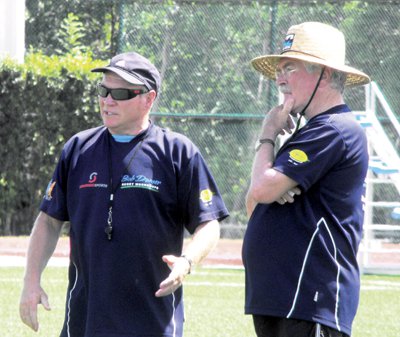 It was the second international rugby match I had ever attended. With just under four minutes to go, Irish flanker Gordon Hamilton took a pass from Jack Clarke and charged for the Australian try line. Outpacing the great David Campese and shrugging off a last-ditch tackle by Bob Egerton, Hamilton went over for one of the most memorable tries in Irish rugby.

I remember the transition from thunderous euphoria to utter silence and back to revelry again as Ralph Keyes kicked the conversion to put Ireland 18-15 ahead. Two minutes later, however, Michael Lynagh scored for Australia to dash Irish hopes of an historic win.

The year was 1991 and Ireland had just lost to Australia in the rugby world cup quarter-final. The Wallabies would go on to win the title, beating England in the final to claim their first world cup.

Guiding Australia to glory that year was Bob Dwyer, and nearly 21 years later, on Phuket, I got to speak with the man who orchestrated my disappointment and that of thousands of other Irish rugby fans.

Bob was on the island as part of a tri-series of coaching clinics being held at Thanyapura Sports and Leisure Club (TSLC) in association with the Phuket Lomas and the Asia Center Foundation to help with the development of rugby union on the island.

With Mike Pennistone, Bob uses self-developed techniques and his years of international and club experience to improve standards of both players and coaches.

Speaking exclusively to the Gazette, Bob explained how the Bob Dwyer Rugby Workshop came to be involved with Phuket rugby.

“The attraction of Phuket was twofold. Pat Cotter asked if we could to do some work in the areas around Phuket where the society has been decimated by the tsunami and contribute to the redevelopment. A pretty hard question to say no to,” Bob said with a grin.

“Then it became a desire to show people who didn’t have a background in rugby that you can play good rugby with just attention to detail in the simple things about the game,” Bob added.

Since winning the world cup Bob has continued to coach at various levels and I was curious to know what drives him to stay involved with rugby and specifically the coaching role he devotes himself to.

“My drive is always to see the game played well. I’m certain I am a much better coach than I was 20 years ago when Australia won the world cup with me as coach,” he said.

Coaching players takes many forms, from skills and tactics to psychological and physical aspects, but coaching coaches is a different animal and requires a more complex process that is not easily transferred.

“We want to see the coaches do three things: teach the technique; move the technique forward into developing a skill and apply that technique to a game and let the players play to see how much they grasp and learn from their mistakes,” he added.

Given that there are three clinics scheduled over the coming months, I asked Bob what he expected from the initial meetings and practical work.

“The real intention of the first workshop is for the coaches to. gain an understanding of what we believe is the correct methodology of being able to transfer play from the practice ground to the playing pitch, and we think we have a very good method for ensuring that transfer occurs and we wanted to see if the coaches fully understood that, and most of them did,” he said.

Aside from the coaches, Bob had an opportunity to see Phuket’s youth players in action during the sessions and he seemed quite impressed with their abilities.

“The catch and pass skills of the kids are pretty good, at least as good as their Australian counterparts. The only thing they’re lacking is consistent competition,” Bob said.

Mike Pennistone added to that, remarking that the player’s movements reminded him of young Brazilian footballers. Not a bad compliment for the youngsters.

And the final words of hope and promise to Phuket’s young rugby hopefuls from the man who helped crush my own brief youthful anticipation of victory some 20 years ago:

We look forward to Bob and Mike’s return and the Gazette will feature more wisdom and expertise from their work with Phuket’s rugby fraternity in the coming weeks.

Phuket Immigration to close for holidays