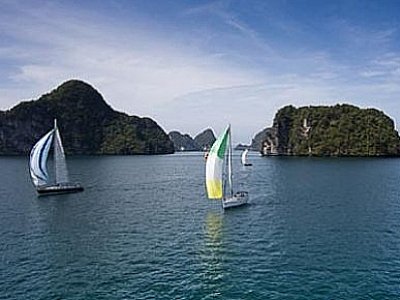 Heading south towards Krabi, competitors navigated through the limestone karsts of Phang Nga Bay, en route to their destination of Ao Nang, where a rest from partying awaited, for a few.

Standings after two days are the same with Ruby Tuesday now leading with two points, Gastion in second with four, and Quantum Fusion in third with six points. Gastion was the quickest boat across the water on day two, finishing in a time of 3:47:02.

Bay Regatta fact: The third most common language spoken at this year’s regatta, after English and Thai, is Russian as there are five Russian entries: Ruby Tuesday, Gastion and Ocean Agassi (all in the Racing Class), Creme Brulee (in Bareboat Charter) and Uminoko (in Cruising A).

The principal sponsor of The Bay Regatta is Da Vinci Yacht Charters.

The Phuket Gazette and PGTV are also sponsors of the event.

What’s the difference between Terry and Suarez?