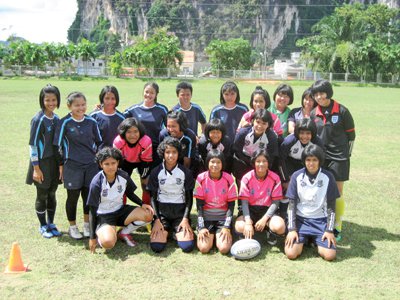 PHUKET: KrabiI RFC recently hosted the Phuket Lomas in Ao Luk for their first U17 fifteen-a-side game of 2012.

These games act as a warm up to the National Youth Games which will be held in Phuket in May and June. As usual the Lomas were playing above their weight with most of the team aged 14 and 15 years. From the kickoff, the bigger Krabi boys tried to take control through their forwards, but fierce tackling by the Lomas forward opposition and using the pace in the backs, they kept Krabi under pressure with brilliant counter attacking. After 10 minutes the Lomas forced a penalty which was converted by the captain, Muk, for a 0-3 lead. Krabi tried to stretch the back line and the bigger centers made yards that eventually led to a try in the corner, but failed to convert leaving the score at 5-3.

As the half wore on, the Lomas began to tire from the constant Krabi battering and they conceded two tries late in the half to go into the break 15-3 down. A change of tactics implemented at half-time brought immediate results when the Krabi forwards lost ruck ball. Claimed by the Lomas, it was passed down the line to Toe, who burst from the Lomas 22 with a brilliant side step and hand off to race away and score

After the conversion, the Lomas were within one score at 15-10. Following a promising Krabi move which was halted by a crunching tackle from Aaron Reading, the Lomas played advantage from the resulting knock on. Scrum half, Beng, fed the ball out to Toe who powered through three tackles to score between the posts, and with the conversion, put the Lomas into 15-17 lead.

The game was slipping away from Krabi and they regrouped for a last push and should have had a try but for a crunching tackle by Keng.

Muk extend the Lomas lead with a penalty to 15-20, but Krabi upped their game considerably going into the last quarter and eventually found a gap through the Lomas defence to score and convert a try. At 22-20 for Krabi, the Lomas had to score and were looking for a way through when caught offside at a ruck. The Krabi fly-half took a quick tap and dived through the unprepared Lomas defense to score under the posts and extend Krabi’s lead to nine points.

Stung by giving away such a weak try, the Lomas immediately went on the attack and showed great all round handling skills by forwards and backs. Lek in the center broke the line and managed to off load in the tackle to Fae, who gave the inside feed for Toe to crash over for another try. Once again, Muk’s kick found its target and the gap closed to 29-27. With the clock ticking down, the Lomas threw everything at Krabi, but couldn’t break through. The very last play of the game saw Sombat take a huge hit just short of the line, but couldn’t hold on to the ball. At the final whistle Krabi had secured a hard fought victory by 29 points to the Lomas 27 points. The next game brings Krabi to Phuket for the return fixture.

In a first for Phuket Rugby, the new Lomas girls team played their first ever competitive matches with two 7-a-side games against a Krabi girls side. In the first game the Lomas were the stronger side and ran out 15 points to 5 winners. In the second game the girls who missed out on the first game were fielded. A fired up Krabi team took a two try lead into half time, but Lomas substitutions changed the balance of the game in the second half and the girls scored two tries at the death to draw the match 10-10. The girls section is a great addition to youth rugby in Phuket and they will also compete in the National Youth games in the girls 7s competition.

Bob Dwyer and Mike Penistone of Bob Dwyer Rugby will be conducting three coaching clinics in Phuket during 2012. The clinics will enhance coaching and benefit the Lomas in their quest to be National Youth Champions on home soil in 2012.