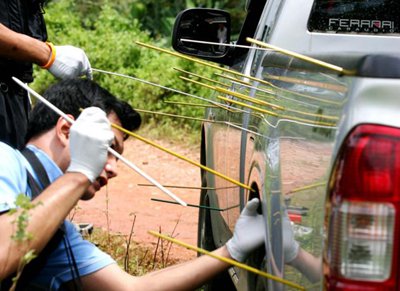 PHUKET: Thai Prime Minister Yingluck Shinawatra yesterday ordered an investigation into the shooting deaths of four Muslims by paramilitaries in the restive south on Sunday.

Prime Minister Yingluck Shinawatra ordered army chief Prayuth Chan-ocha to investigate the incident and report his findings in detail immediately. She said if those killed and wounded in the incident were found to be innocent villagers, the government would fully ‘take care’ of them.

On Sunday night, four people were killed and five were wounded when the Thai army rangers opened fire on a pick-up truck in the province of Pattani. General Prayuth said if the authorities were found to be at fault, those responsible would be punished through the justice process.

Lt-Gen Udomchai Thammasarorat held a press conference to give details about the shootings and said the assailants fired M79 grenades at an operational base in Nong Chik district before the shooting.

He added that a pick-up truck carrying a number of people was stopped for a search after rangers were dispatched to intercept the attackers. Some of the men on board got out of the pick-up truck and then opened fire at the rangers, he claimed.

Pattani governor Theera Mintrasak said yesterday a committee of inquiry will investigate the incident in order to ensure justice. The inquiry was expected to be completed within 30 days.

Angkhana Neelapaijit, chairwoman of the Justice for Peace Foundation, called on Deputy Prime Minister Yutthasak Sasiprapa to show responsibility for giving out incorrect information on Sunday’s shootings. Yutthasak said those killed and wounded in the shooting were believed to have caused unrest, but residents say they were villagers who were on their way to a funeral.

“This shooting will make it more difficult for the government to win the trust of the people. Gen Yutthasak and the Region 4 Internal Security Operations Command must come out and admit a mistake was made, and declare publicly that the culprits will be punished within the justice system. They should not talk only about reparations,” Angkhana said.

Since 2004, over 4,800 people have been killed in the regions south of Phuket, including Pattani, Yala, and Narathiwat, as local insurgent groups renewed their fighting efforts against the government.

More than 7,000 people have been injured in violent incidents launched by separatist militants.

The violence in the South of Thailand reached a crescendo and made worldwide headlines under former PM Thaksin Shinawatra when, on October 25, 2004, security forces arrested hundreds of local people who had their shirts taken off and their hands tied behind their backs. They were made to lie face down on the ground and suffered brutal beatings. At least 85 died in that incident and Thaksin was ousted in a coup the following year.