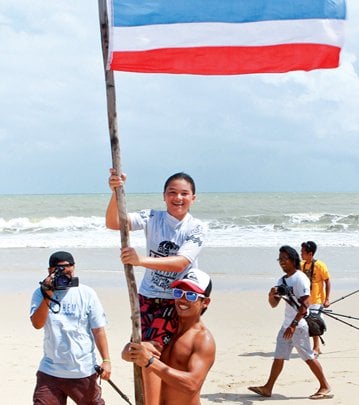 At 13 years old, Annissa was the youngest of the women finalists that included pros such as runner-up Nur Herwani from Malaysia, third place Michaela Partin from the USA, and Brenda Lee from Malaysia who finished in fourth place.

The women’s final was held in windy, two to three foot surf, just after round one of the Men’s Open had been completed as it was expected that the following day’s surf would bring significantly larger surf conditions that could have made it impossible for the women to compete.

On finishing her final run, Flynn was surprised and delighted to learn that she had won.

“Really? I couldn’t hear anything but the wind and the pounding waves!” She was promptly hoisted up on the shoulders of fellow Thai surfer Chatchai “Man” Samporn who carried her up to the judge’s tower. After Annissa had a moment to relax and enjoy the congratulations from her supporters and other competitors, she was asked about her strategy during the challenging final.

“I didn’t know what would happen out there, it was hard to know which waves were going to be the good ones. It was part luck and part skill, I guess, and I’m lucky I got a couple where I could make a few turns. My beach break at home in Phuket can be like this, so maybe my experience there helped me out today.”

This is Annissa’s second win at an Asian Surfing Championship (ASC) event in Malaysia, following victory at the ASC event in Terengganu on December 4, 2011. She also finished the inaugural ASC season as the runner-up Asian Women’s Surfing Champion.

Nine women from the countries of Indonesia, Thailand, the USA and Malaysia competed for four spots in the final, including 2011 Women’s Asian Surfing Champion Yasnyiar “Bonne” Gea, who did not qualify from the semifinals.

The Men’s Open Final was won by current Asian Surfing Champion Raditya Rondi from Indonesia. Rondi, who also won the 2011 Quiksilver Thailand Surf Competition in Phuket, battled for 25 minutes against Mohd Nazrin “Super Yen” from Malaysia, Abdullah Areef from the Maldives, and Gilang from Indonesia.

Surfing conditions on the final day lived up to the moniker of “mayhem” and were as expected the previous day, but for the Men’s Open finals the conditions eased and allowed for a thrilling finale to the three-day competition.

Rondi was all smiles and very pleased to have started the 2012 ASC tour season with a win. “This is my first time to Desaru and it’s been lots of fun, so to take the win today just caps it off. It’s a great way to start off the year. We were really lucky that conditions got better in the finals, with the wind all but stopping so it got pretty good, which made it easier to find a couple of nice waves,” he said.

When asked about the significance of his win, Rondi replied, “Yes it’s great to win the first event of the season, but there are a lot of good surfers on the ASC tour now and there will be lots more events, so I’ll have to work hard and travel if I want to retain my title in 2012,” he added.

A great start to the year for the incumbent Phuket surfing champion and for Annissa Flynn’s aspirations to become the number one surfer in Asia. The Phuket Gazette will keep readers updated on the progress of both of them throughout the 2012 Asia surf calender.