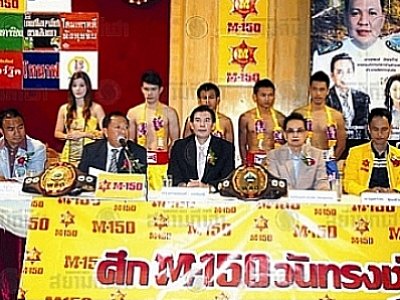 The WBO Bantam-weight title belt was flown in by helicopter and carried by armed Thai soldiers, who made a rapid-descent (fast-roping) from their helicopter.

The event raised an estimated 3 million baht according to organizers – money that will be used for sea turtle conservation projects.

The venue was changed from Nai Yang Beach at the last minute to the multi-purpose hall at Phuket Airport due to the current bad weather.

Singyu controlled the pace of the fight early on, landing several heavy combinations to the midsection of Migreno as they neared the closing bell of the first round. Migreno found himself unable to connect with the uppercut he so desperately sought throughout the fight, due to solid footwork and a tight guard by Singyu.

Migreno landed some effective punches in the third and fourth rounds using his reach advantage, but they weren’t heavy enough for a knockout and weren’t enough for the judges either.

The five-bout card was sponsored by M-150 and attended by Phuket Governor Tri Augkaradacha, Government Spokesman Prompong Nopparit and other local dignitaries.

The Andaman Region’s beaches traditionally hosted 5,000 to 10,000 sea turtle nests. That number has now dwindled to just a few hundred. The trend indicates that sea turtles, many species of which are already listed as “highly endangered”, could be on the way to total extinction in local waters.